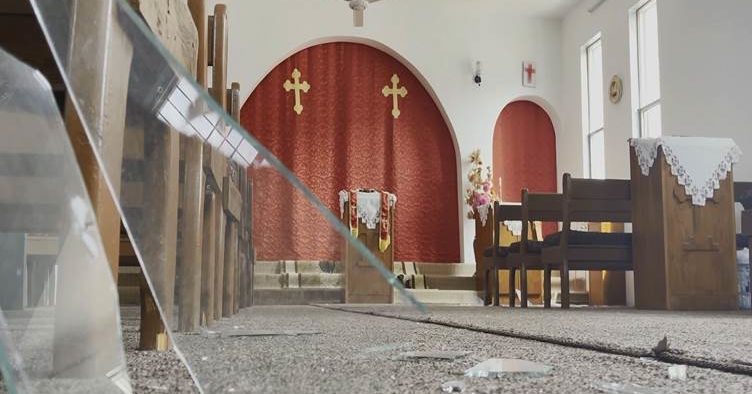 Turkish forces bombed the vicinity of a Christian village in Duhok province in the early hours of Tuesday morning, damaging several buildings, including the village church, locals have told Rudaw.

“It was around 2:40 am when the rockets hit near the village. As you can see, it is only 100 meters away,” Dawoud Yukhanna, a villager from Miska, told Rudaw, adding that “people were terrified.”

“They could not sleep all night after hearing the loud sound of the bombs.”

Yukhanna also said that the windows of the church and several other houses in the village were broken in the bombardment.

Miska is located in Amedi, and lies some 15 kilometers away from Kesta and Chalke – villages recently abandoned due to Turkish airstrikes. Only eight families have returned to live in Miska.

The Turkish army launched two military operations in Duhok province’s Avashin, Basyan, and Metina areas on April 23. Their stated aim is to remove the Kurdistan Workers’ Party (PKK) fighters from these areas.

The PKK is a Kurdish armed group struggling for the increased rights of Kurds in Turkey. It is considered a terrorist organization by Ankara which regularly carries out military campaigns against the group at home and in the Kurdistan Region.

The ongoing clashes between the PKK and Ankara have pushed many to flee their homes.

On Tuesday, Edine became the third village to be evacuated since Turkey launched new operations, with the four remaining families leaving their homes.

Most of the families have fled to elsewhere in the province.

A 20-year-old civilian was injured in Deshish village on Tuesday after Turkey bombed a nearby area. Only three families remain in the village.

How Iran has given its proxies unprecedented drone capabilities