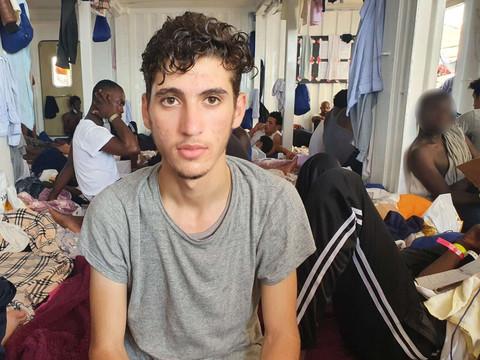 Syrian refugees are opting to flee to Europe through Libya and then the Mediterranean sea-crossings, rather than risk entering Greece.

Three young Syrians, onboard the Ocean Viking rescue vessel, told EUobserver last week that Greece and Turkey have become too dangerous and too expensive as viable options.

Among them is 21-year old Mahmoud from Daraa, pictured above, who said his father had been killed in the war, leaving behind a wife and three children.

He is the oldest child.

“They wanted to take us to the army, but it is all death and destruction,” he said, of the Syrian military.

Even though Turkey borders Syria, Mahmoud said it is now cheaper to fly directly from Damascus to Tripoli.

Majid, a 23-year old from the same city, made similar comments.

He asked not to have his photo taken, because his father works for the state. “I left because of the war. I don’t want to serve in the army,” he said.

He explained that trying to enter Greece now costs some $15,000, while fleeing through Libya and by boat all the way to Germany is around $6,000.

“This one is easier and the other one (Turkey to Greece) is more dangerous. People go missing in Greece,” he said.

Majid studied in Aleppo but was required to go to another district, which would have landed him in the army, he said.

Shadi is 26 and from Aleppo. He also asked not to have his photo published. He fled Syria to Lebanon when he was 18 to escape military service, he said.

“My brother is in the army, so I went to Lebanon to work because we can’t have both of us in the army,” he said.

But with Lebanon in chaos, the work soon dried up, and so he bought a ticket to Libya.

He said he didn’t go to Turkey because it would have cost him $4,000, not including all the fees to cross into Greece.

The flight to Libya was much cheaper, and so he arrived almost three months ago, he said. “The sea is safer than in Turkey. If you go from Turkey (to Greece) it is very dangerous for people like us,” he said.

Shadi said he paid $2,000 to cross by boat from Libya – before getting picked up by the Ocean Viking.

Fleeing Libya by boat through the central Mediterranean route is itself an enormous risk. Over 800 have died so far in the attempt, with many others intercepted and returned to Libyan detention centres.

But their testimonies come after the EU has helped shore up Greece’s land and sea borders with Turkey.

They also come after numerous documented violent pushbacks by the Hellenic Coast Guard, which have also implicated the EU’s border agency Frontex.

Both have denied any wrongdoing, despite numerous pushback cases documented by NGOs and the media. The United Nations high commissioner for refugees documented around 300 instances in the first three months of this year, spanning the Aegean Sea and Greece’s land border with Turkey.

The European Commission has defended Frontex over the violations, following an internal probe that cleared the Warsaw-based agency of any wrongdoing earlier this year.

But critics say the probe was biased, alleging that Frontex helps intercept migrants for Greece to then push them back.

“Frontex is complicit, is a legitimiser, and a facilitator of this unlawful state policy,” Iftach Cohen, a lawyer who is taking Frontex to the European Court of Justice, told the European Parliament on Wednesday (14 July).

Now the European Commission is weighing in on the matter once again, after more evidence emerged of a pushback in the Aegean Sea by the Hellenic Coast Guard.

Earlier this week, EU home affairs commissioner Ylva Johansson warned Greece to stop the pushbacks. She described the practice as “violations of our fundamental European values.”

Previous Article
Wife of inmate suffering from brain tumors says husband’s health has taken a turn for the worse
Next Article
Taliban can comfortably negotiate with Turkey as ‘We have nothing against their beliefs’: Erdogan

Taliban can comfortably negotiate with Turkey as ‘We have nothing against their beliefs’: Erdogan
NAT 21st July 2021
Submit an Op-Ed
Tweets by NewsAboutTurke1