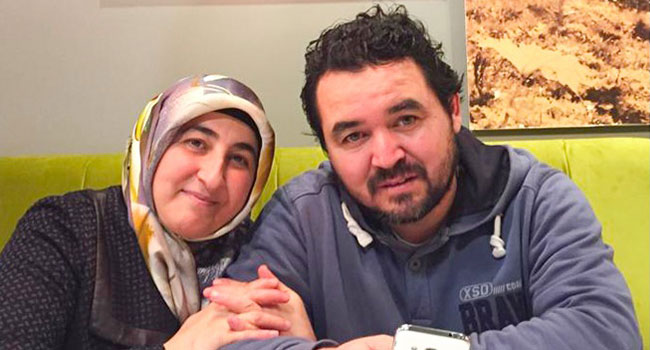 Züleyha Koç, the wife of inmate Lütfi Koç, who is suffering from brain tumors, said on Twitter that her husband’s health had taken a turn for the worse in prison and pleaded with authorities to release him immediately.

Züleyha Koç said her husband, who was diagnosed with two brain tumors after his arrest in March 2019, was “slowly dying in prison.” The health of the couple’s disabled son has also deteriorated, she said.

“I haven’t been able to afford to take my son to physical therapy since my husband’s arrest, and now he can barely move his arms and legs,” Züleyha Koç said. “My son needs round the clock care, and I can’t handle it on my own.”

According to his family, Lütfi Koç does not have access to proper healthcare, either, and is not receiving treatment for the tumors in prison.

In addition to his health problems, Lütfi Koç was severely beaten in Afyon Prison in December.  After the beating, Koç told his family he was afraid of being killed in prison.

Koç said his eyes had been bloodied and that the pain caused by an inguinal hernia had worsened as a result of the beating. He told his family that he filed a complaint with the prosecutor’s office but to no avail, and the doctor did not issue a report stating he was beaten.

Koç was arrested for alleged membership in the Gülen movement and was denied release from prison despite serious health problems. He had worked for an educational institution that was associated with the Gülen movement, a faith-based group inspired by Turkish cleric Fethullah Gülen.

Turkish President Recep Tayyip Erdoğan has been targeting followers of the Gülen movement since the corruption investigations of December 17-25, 2013, which implicated then-Prime Minister Erdoğan, his family members, and his inner circle.

Dismissing the investigations as a Gülenist coup and conspiracy against his government, Erdoğan designated the movement as a terrorist organization and began to target its members. He intensified the crackdown on the movement following a coup attempt on July 15, 2016, that he accused Gülen of masterminding. Gülen and the movement strongly deny involvement in the abortive putsch or any terrorist activity.

Züleyha Koç said she was worried that both her child and her husband’s health would deteriorate to the point of return. “The authorities who refuse to release my husband are responsible for our suffering,” she said.

She had said in a previous interview with the TR724 news website that her husband was under immense psychological pressure in prison. She said he had been barred from going out to the yard for fresh air and was not treated for the tumors after the diagnosis.

There have been widespread claims of torture in Turkey’s prisons and detention centers that have so far gone uninvestigated. Turkey is party to several international conventions that have different review and inspection mechanisms such as the United Nations, the Council of Europe (CoE) and the Organization for Security and Co-operation in Europe (OSCE).

Yet, in the recent past the Turkish government has continuously disregarded the provisions of the constitution and failed to uphold its international obligations. Turkey blocked the publication of a report by a Council of Europe delegation that paid a fact-finding visit to Turkey in 2016 to investigate allegations of torture and ill-treatment in Turkish correctional facilities.