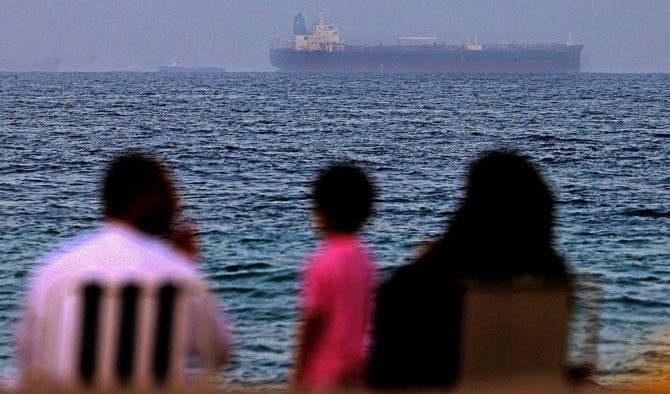 The drone attacks on the Mercer Street tanker on July 29-30 in international waters in the Arabian Sea are among the latest reminders of the need to beef up regional maritime security. They also underscore the need for the new Iranian administration to review its regional policies, as it is almost certain that Tehran was behind the new attacks.
The US Central Command issued a statement on Aug. 5 with the results of its investigation, which found that a military-grade nitrate-based explosive identified as RDX was used in the attacks, causing the death of two crew members — a Romanian citizen and a UK national. It also found that the impact created a hole measuring 6 feet in diameter in the ship and badly damaged its interior, and that the drone was “rigged to cause injury and destruction.” CENTCOM explosives experts determined that the components recovered at the scene were “nearly identical” to previously collected examples from Iranian drones, noting that the distance from the Iranian coast to the locations of the attacks was within the range of documented Iranian drones.
The Group of Seven condemned Iran for the drone attacks. The foreign ministers of the seven countries — Canada, France, Germany, Italy, Japan, the UK and the US — as well as the EU said in a statement issued on Aug. 6: “This was a deliberate and targeted attack, and a clear violation of international law.” They stressed that “all available evidence clearly points to Iran. There is no justification for this attack.”
The impact of these attacks on the Joint Comprehensive Plan of Action (JCPOA) is uncertain. However, they cast a shadow on future dealings with the new administration in Iran. UK Foreign Secretary Dominic Raab said last week about the new government in Tehran: “If they continue down the track of harrying or attacking shipping in the Middle East, if they continue destabilizing activities through their proxies, if they continue to row back from their nuclear commitments under the JCPOA, and if they continue to take arbitrarily detainees as we have had with Nazanin Zaghari-Ratcliffe, Anoosheh Ashoori and Morad Tahbaz, then we will apply cost, we will hold them to account.” Raab said that while diplomacy’s door is “always ajar as we demonstrated over the last two years, we cannot have incidents like the attack off the coast of Oman without Iran being held to account.”
The UN Security Council has been discussing the attacks behind closed doors for days, but it is not clear whether it will be able to agree on a unified course of action. Its formal meeting on Monday this week is clear recognition that these events have the potential to destabilize the region and threaten international shipping and freedom of navigation. India, as the UN Security Council chair for the month of August, indicated in July its intention to focus on maritime security, peacekeeping, and counter-terrorism. Differences between the council’s permanent members may make it difficult to forge a unified approach toward the subject, but that should not prevent international and regional actors from working together to upgrade the capabilities already there and launch new initiatives to beef up maritime security in the region, including in the Red Sea, Arabian Sea, and the Gulf.
Britain’s top military commander, Gen. Nick Carter, chief of the defense staff, said last week that Western powers need to retaliate for the tanker attacks, “otherwise Tehran will feel emboldened.” Carter told the BBC that if a regime of deterrence is not restored in the Gulf, there will be more attacks and a higher risk of “miscalculation” by Iran. “What we need to be doing, fundamentally, is calling out Iran for its very reckless behavior,” he said.
Restoring that “regime of deterrence” is possible by upgrading the capabilities of existing security frameworks, including the Combined Maritime Force (CMF). The CMF is a multinational maritime partnership, whose express purpose is to “uphold the international rules-based order by countering illicit non-state actors on the high seas and promoting security, stability and prosperity across approximately 3.2 million square miles of international waters, which encompass some of the world’s most important shipping lanes.”
The CMF’s main focus is promoting security, stability, and a safe maritime environment. Its mandate also includes combating narcotics, smuggling and piracy. It involves engaging and cooperating with regional and other partners to strengthen and improve capabilities to achieve those goals. When requested, the CMF will also respond to environmental and humanitarian incidents. The CMF has three Combined Task Forces (CTFs) — CTF 152 deals with maritime security inside the Arabian Gulf; CTF150 deals with maritime security outside the Arabian Gulf, and CTF 151 deals with counter-piracy operations.
The CMF has 34 member nations: Australia, Bahrain, Belgium, Brazil, Canada, Denmark, Egypt, France, Germany, Greece, Iraq, Italy, Japan, Jordan, Republic of Korea, Kuwait, Malaysia, the Netherlands, New Zealand, Norway, Pakistan, the Philippines, Portugal, Qatar, Saudi Arabia, Seychelles, Singapore, Spain, Thailand, Turkey, UAE, UK, US and Yemen. It is commanded by a US Navy vice admiral, who also serves as commander of the US Naval Forces Central Command and US Navy Fifth Fleet. All three commands are located at the Naval Support Activity Base in Bahrain. The deputy commander is a UK Royal Navy commodore. Other senior staff roles at the CMF headquarters are filled by personnel from member nations.

Raisi has called for ‘cooperation among regional states for peace and security.’ The first step in such cooperation is for Iran to stop its sanctioned attacks on shipping and play a positive role in safeguarding maritime security.

The existing framework and mandate is sufficient to deal with events such as the attacks on the Mercer Street tanker last week. However, with an escalation in the number and sophistication of recent attacks, the CMF’s capabilities need to be scaled up to restore deterrence. The CMF also needs to extend its geographic coverage to include the Red Sea, which has recently witnessed numerous attacks on shipping and oil installations.
At the same time, Iran should be put on notice that it should not use the cover of nuclear negotiations to continue to undermine, directly or through proxies and allies, regional maritime security.
Last Thursday, new Iranian President Ebrahim Raisi called for “cooperation among regional states for peace and security.” He made the remarks during meetings with heads of foreign delegations who arrived in Tehran to attend his swearing-in ceremony. The first step in such cooperation is for Iran to stop its sanctioned attacks on shipping and play a positive role in safeguarding maritime security.

By: Dr. Abdel Aziz Aluwaisheg – the GCC Assistant Secretary-General for Political Affairs & Negotiation, and a columnist for Arab News. The views expressed in this piece are personal and do not necessarily represent GCC views. Twitter: @abuhamad1