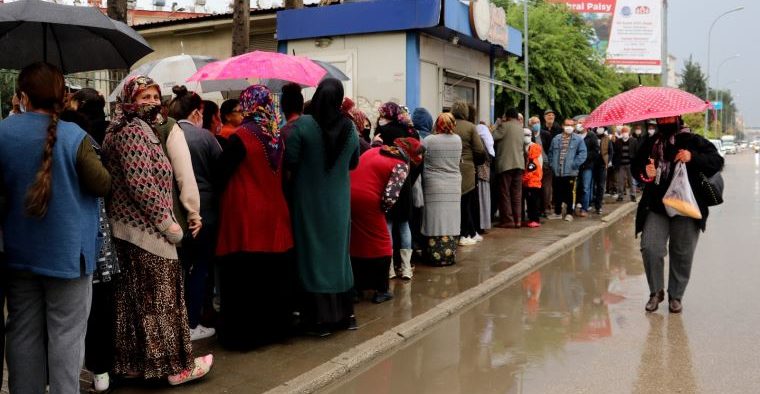 Under a heavy winter sky, the grimly silent queue of people stretches around the corner from Bayram Duman’s kiosk, which offers discount bread for Istanbulites hurt by Turkey’s economic malaise.

Turkey’s cultural and historic capital has been offering cheaper bread for the poor at “Halk Ekmek” (“People’s Bread”) shops since 1978.

But with prices soaring on everyday items as Turkey battles one of its gravest economic crises in decades, Duman says the queues are especially long this year.

“The prices have risen significantly at the bakeries. People keep coming,” the 50-year-old says.

The queues are a worrying sight for Turkey’s veteran President Recep Tayyip Erdoğan, who is trying to fight inflation by slashing interest rates.

As economists had predicted, Erdoğan’s solution is not working out.

According to official data, which many Turks are starting to question, prices last month rose by 21 percent compared to November 2020.

Economists expect this figure to nearly double by early next year because of a sharp depreciation of the lira, which makes imports much more expensive.

But the higher prices are already on display in Turkish stores, where basics such as sunflower oil, eggs and butter cost roughly double what they did a year ago.

Pro-government media accuse the city, which is run by opposition mayor Ekrem İmamoğlu, of politicizing the bread queues ahead of an election due by mid-2023.

One newspaper claimed İmamoğlu was playing a “dirty game” by shutting down many of the discount bread shops, making the queues longer at existing ones.

The city counters that it is actually making more loaves of discount bread than ever before, additionally selling them in some supermarkets.

Yet the kiosk queues are also long in other big cities, including the capital Ankara.

After waiting in patient silence under the rain for about 10 minutes, most of Duman’s customers leave with four or five loaves of bread in clear plastic bags.

Hiding under hoods and umbrellas, few wish to speak to reporters about what brought them out the cold streets in search of Turkey’s cheapest bread.

The loaves sell for 1.25 liras (10 US cents), about half the prices of most regular bread.

The savings might seem meager — about 25 cents for five loaves — but they add up in a country where more than 40 percent of the people are making the official minimum wage.

Facing the prospects of the toughest election of his 19-year rule, Erdoğan last week raised the minimum monthly take-home pay from 2,826 to 4,253 liras — about $340 (300 euros) at current exchange rates.

Despite the hike, the minimum wage is still lower than the $380 it was worth at the start of the year.

Economists also worry that the 50-percent increase in pay for so many people will make Turkey’s inflation problem even worse.

Tags:
Previous Article
Kurdish leader Demirtaş says would win presidency even in prison if nominated by opposition
Next Article
America is now in fascism’s legal phase