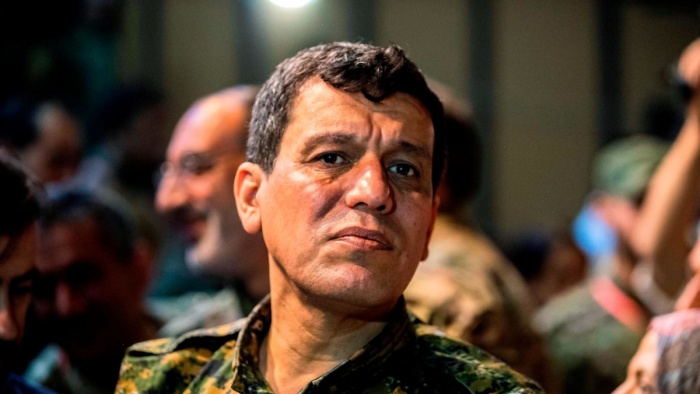 Mazloum Abdi, the commander-in-chief of Syria’s Kurdish-led Syrian Democratic Forces (SDF), said on Thursday his troops did not fire the rocket that hit the Turkish border town of Karkamış on Monday, killing a teacher and a 5-year-old, the Rudaw news website reported, citing the Hawar News Agency (ANHA).

Following the detonation of an explosive device in İstanbul that killed six people and injured dozens of others, Turkish President Recep Tayyip Erdoğan blamed the attack on the outlawed Kurdistan Workers’ Party (PKK).

On Monday Erdoğan renewed a longstanding threat to launch a cross-border ground operation into SDF-controlled areas of northeastern Syria, drawing calls for restraint from both Moscow and Washington.

Ankara vehemently opposes the Kurdish People’s Protection Units (YPG), the main element of the US-backed SDF, because of its links to PKK militants who have waged a long insurgency in southeastern Turkey.

The SDF is the de facto army of the semi-autonomous Kurdish administration in northeastern Syria. It provided crucial assistance to a US-led coalition against the Islamic State in Iraq and the Levant (ISIL).

Ankara began a series of airstrikes as part of Operation Claw-Sword on Sunday, targeting Kurdish militants across the border in Iraq and Syria.

On Monday, Turkey said five rockets were fired from Syria by the Kurdish militants, with one of them hitting a school, killing a teacher and a student.

Abdi on Thursday denied the accusation, saying SDF does not target Turkish territory.

“We have nothing to do with this attack,” the SDF commander was quoted as saying.

Addressing the Turkish airstrikes, Abdi said they were targeting the infrastructure of Kurdish-held Syria.

“Places such as schools, hospitals, and oil fields were targeted. In this respect, we see these attacks as a new threshold. There have been air and ground attacks against our region for a long time. However, the attacks in the last four days show that we have entered a new phase and a new extent of danger,” the commander was quoted as saying.

A Syrian woman named Ahlam Albashir was detained several hours after the İstanbul blast for having left a bag in the area with the bomb. Turkey blamed the attack on the outlawed PKK and Kurdish militant groups in Syria, although they deny any involvement.

“We will stand with our friends who are fighting with us against ISIL. We are making efforts to prevent the attacks. Of course, it is also the responsibility of these [anti-ISIL] forces to stop the attacks by the Turkish state,” Abdi said, adding, “We know very well that we are in a difficult process. Resisting warplanes is not an easy thing. We believe our people will continue their resistance with this spirit.”