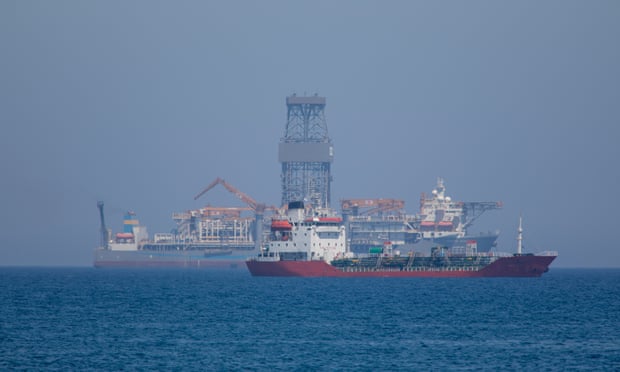 Tensions between Cyprus and Turkey over energy could soon come to a head, with ExxonMobil apparently poised to announce a significant natural gas find off the divided island’s southern coast.

After more than three months of deep-water exploration in the eastern Mediterranean, the US firm is expected to unveil findings this week in what is being described as a seminal moment in the race to tap potentially profitable underwater resources.

Charles Ellinas, an industry expert and former head of Cyprus’s national hydrocarbons company, said: “All the seismic data suggests that enough has been found to excite ExxonMobil to continue exploration. Potentially there could be great reserves.”

But stakes could not be higher in the region. Amid escalating friction over the potential offshore energy find, Turkey has declared it will dispatch its own drilling ships to the area, a year after deploying gunboats to stop the Italian company Eni exploring for offshore wealth at the behest of Greek Cypriots.
Advertisement

Last week Ankara said natural resources in the eastern Mediterranean and the Aegean, where tensions have also risen with Greece, remained “a strategic goal and national issue”.

“In the coming days we will start drilling with two ships around Cyprus,” said the Turkish foreign minister, Mevlüt Çavuşoğlu, ratcheting up the rhetoric. “Let those who come to the region from far away, and their companies, see that nothing can be done in that region without us. Nothing can be done in the Mediterranean without Turkey; we will not allow it.”

Gas fields were first discovered in waters off Cyprus in 2011. ExxonMobil, one of five international oil companies exploring around the island, has focused on Block 10, adjacent to Egypt’s giant Zohr field, which is believed to be the most promising of all the licensed areas.

If unlocked, the deposits beneath the seabed could radically reshape energy geopolitics and – western politicians hope – ultimately lessen Europe’s reliance on Russia for gas.

In ethnically split Cyprus, the prospect of an energy bonanza is also seen as a potential game changer that could help reconcile the island’s rival Greek and Turkish communities.

“If there is a big find, there’ll be big stakes backed up by a huge American company,” said Hubert Faustmann, a professor of history and political science at the University of Nicosia. “It could be a blessing that will help end the seemingly intractable Cyprus problem. Even without a solution, there will be a lot of pressure to allow exploitation of the hydrocarbons.”

But with Ankara disputing Nicosia’s maritime jurisdiction in seas riven with competing claims over boundaries – and increasingly incensed over energy agreements the island has signed with Greece, Israel and Egypt – a major discovery could also trigger other dynamics. In the worst-case scenario, military conflict could break out, analysts believe.

“The situation is escalating rather than de-escalating because Turkey is determined to stop exploitation of any resources in Cyprus’ exclusive economic zone (EEZ) without its consent and if Turkish Cypriots don’t also benefit from them,” Faustmann said.

Although experts caution that the reserves’ commerciality is still far from assured, an air of optimism has filled Nicosia’s colonial-era presidential palace. Some officials go as far as to speak of the European Union’s easternmost member becoming a “new Kuwait”, enriched by its role as a gas-producing hub.

“If it is a substantial reserve, a lot of things are going to change,” said the government spokesman Prodromos Prodromou, conceding that underwater resources could be decisive in breaking the impasse in talks to reunify the island.

“A find of some magnitude could act as an incentive for Turkey to discuss a solution and compromise, but it is true the reaction could also be negative. [Turkey’s president] Erdoğan is unpredictable.”

Cyprus has been partitioned between Turks in the north and a majority Greek population in the south since a short-lived coup, inspired by Athens and aimed at union with Greece, sparked Ankara to order a full-scale invasion in 1974.

After seizing the island’s northern third, up to 40,000 Turkish troops were stationed in the enclave, and Turkish Cypriots unilaterally proclaimde independence in 1981. Ever since, Turkey has refused to recognise the Republic of Cyprus or its claim to an exclusive economic zone in the seas beyond its coast.

Hydrocarbons are expected to be high on the agenda when President Nicos Anastasiades, who heads the internationally recognised south, meets the Turkish-Cypriot leader Mustafa Akıncı on Tuesday. The two men have had little contact since the collapse of reunification talks in 2017, when negotiations came closer than at any other time to resolving the west’s longest-running dispute.

After years of foot-dragging, and in a clear effort to resolve the brewing crisis, Anastasiades’ government edged closer this month to creating a sovereign fund to manage revenues from reserves and ensure they are shared equitably between both communities. “It will send the message that when the time comes the money will be shared,” said Prodromou of the fund due to be passed into law within days. “They won’t be able to say that Greek Cypriots are taking advantage of Turkish Cypriots’ interests.”

But Turkey, the only country to recognise the island’s breakaway north, argues the offshore wealth should be part of a comprehensive Cyprus settlement.

At a time when markets are flooded by cheap gas, industry experts say there is little prospect of any discovery becoming commercially viable anytime soon, even if demand is also growing.

“ExxonMobil is looking for substantial quantities of gas to support its ultimate plan to build a liquefaction plant in Cyprus,” said Ellinas, a senior fellow at the Atlantic Council’s global energy centre. “This is only the beginning.”

But, in the meantime, there are fears that Ankara’s threat to embark on drilling operations off Cyprus – despite strident criticism from the EU over the need “to respect the sovereignty of member states” – could take the battle over hydrocarbons to new and dangerous heights.

“If Turkey does start drilling, as it has threatened, in Cyprus’ exclusive economic zone, it will be very, very provocative,” said Ellinas. “Suppose they actually find gas: what are they going to do then? It will turn everything upside down.”

A thaw in Turkey’s relations with Egypt?
NAT 14th March 2021

A thaw in Turkey’s relations with Egypt?