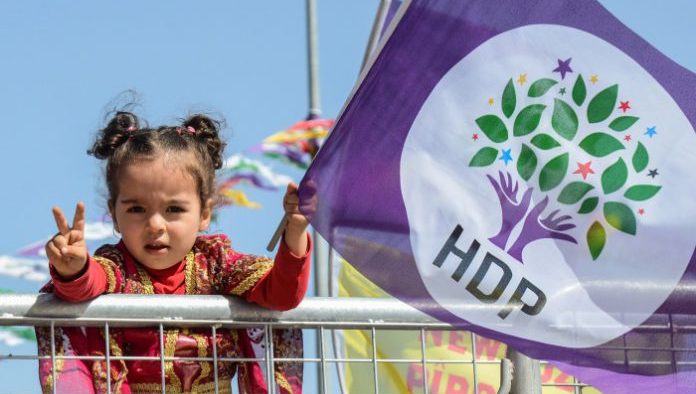 A girl flashes the victory sign as holding a flag bearing the logo of Peoples’ Democratic Party (HDP) as Turkish Kurds gather during Newroz celebrations for the new year in Diyarbakir, southeastern Turkey, on March 21, 2018. Newroz (also known as Nawroz or Nowruz) is an ancient Persian festival, which is also celebrated by Kurdish people, marking the first day of spring, which falls on March 21. / AFP PHOTO / ILYAS AKENGIN

Turkey in recent years has removed mayors in the Kurdish-dominated Southeast elected from the HDP on allegations of terrorist support and replaced them with government-appointed trustees. After the HDP vowed to take back these municipalities in the March 31 local elections, Erdoğan threatened the HDP, saying “If you send government funds to ‘Qandil’ [a reference to the military headquarters of the PKK in northern Iraq], we will start appointing trustees again.”

Erdoğan’s remarks came during a rally in the nationalist province of Yozgat after he had the crowd watch speeches by HDP politicians in an effort to attract nationalist votes.