An ongoing crisis: Freedom of speech in Turkey

An ongoing crisis: Freedom of speech in Turkey 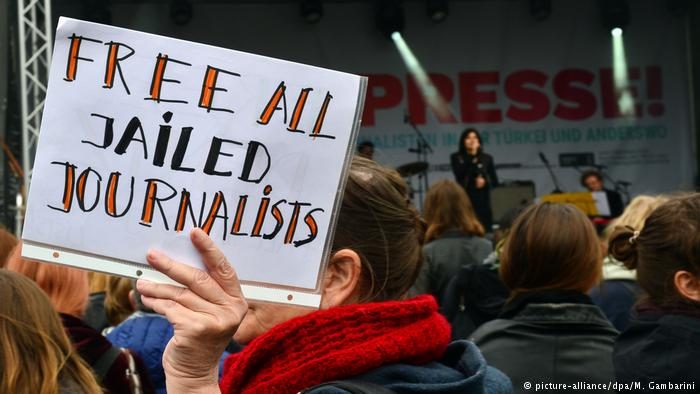 Turkey leads the world in imprisoned journalists and continues to arrest anyone who voices opposition to the Erdogan government. As local elections approach, the current pressures on a free media are expected to remain.

In June 2016, Sedat Ergin, then editor-in-chief of Turkey’s Hürriyet newspaper, took the stage at the Global Media Forum in Bonn, Germany to accept the DW Freedom of Speech Award.

Deutsche Welle Director General Peter Limbourg stated that Ergin was receiving the award because of his commitment to free expression and the fact that his newspaper was one of the few remaining independent voices in Turkey. President Recep Tayyip Erdogan was cracking down on the media using strong-arm tactics that included attacking publishers and detaining journalists. At the time, Ergin himself was facing charges of insulting the president.

“[Ergin] shares the fate of hundreds of journalists in Turkey who are exposed to high risks every day in the struggle to maintain independent journalism and press freedom,” Limbourg said.

In accepting the award, Ergin stressed the importance of a free and independent media in holding government to task and the role of free expression in democratic societies.

“Freedom of speech is one of the most fundamental values of humankind,” the journalist said. “It is an essential aspect of our existence in human societies.” Reflecting on the atmosphere of fear and anxiety for the media in Turkey at the time, Ergin said that receiving the award came with mixed feelings.

“When the subject of the award you have received is freedom of expression, the troubling state of that freedom is inevitably highlighted,” he said.

In Turkey exactly one month later, a coup d’etat against the ruling government was attempted. President Erdogan immediately declared a state of emergency and in the months and years that have followed, tens of thousands of military personnel, public servants, academics, writers and journalists have been detained. While the trials for many of those arrested are ongoing, others have already been sentenced, some even receiving life in prison.

According to Human Rights Watch’s World Report 2019, 130,000 public officials were dismissed following the 2016 coup over alleged association with terrorist groups, mostly the Fethullah Gülen religious movement. Gülen, who lives in exile in the US, is accused by Erdogan of masterminding the attempted coup. Turkey’s Ministry of Justice stated that as of June, almost one-fifth of the total prison population was charged or convicted of terrorism offenses. Others have been charged with “insulting the president.” 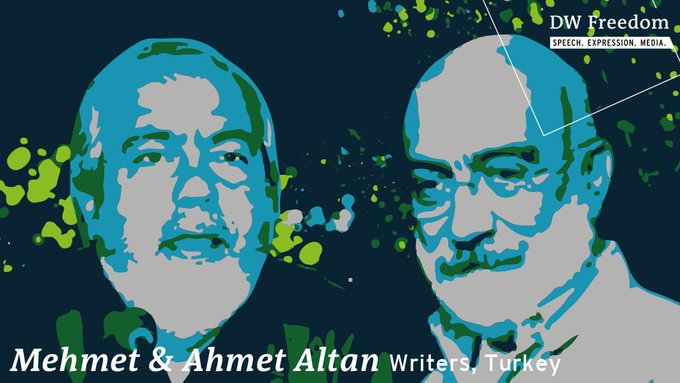 Brothers #MehmetAltan and #AhmetAltan are journalists and authors who have been charged with participating in the 2016 coup in #Turkey. Both have been sentenced to life in prison and are appealing.

Get to know them and other DW champions of free speech: https://p.dw.com/p/1J3eh

“There is a crisis of freedom of expression in Turkey that has been long in the making with many prosecutions of journalists over the years,” said Emma Sinclair-Webb, Turkey director for Human Rights Watch (HRW). “It’s now reached a point where there’s a total closing down of critical media.”

The Platform for Independent Journalism (P24), a not-for-profit, civil society organization that works to support and promote editorial independence in the Turkish press, set the number of imprisoned journalists and media workers at 159. Many of these are being held in pre-trial detention. P24 maintains a database of imprisoned journalists and shuttered media houses (193) and publishes daily updates on the status of the many journalists behind bars and their cases as they move through the Turkish judicial system.

Read more: A return to dark days for journalists in Turkey

In February, brothers Ahmet Altan, Mehmet Altan, both writers and commentators, and their colleague Nazli Ilicak were sentenced to life imprisonment without parole on charges related to the coup. Mehmet Altan was released on bail in June after rulings by both the Turkish Constitutional Court and the European Court of Human Rights ordered his release. Ahmet Altan and Ilicak remain behind bars. Turkish journalist Can Dundar is being tried in absentia while living in exile in Germany. German/Turkish journalist Deniz Yücel was released in February 2018 after spending a year behind bars. A correspondent for the German newspaper, Die Welt, Yücel is now back in Germany and is planning on suing Turkey to demand compensation for his “unlawful detention.” On January 9, 2019, a court in Istanbul sentenced journalist DW journalist Pelin Unker to 13 months and 15 days in prison, along with a fine of 8,600 Turkish lira (€1,370, $1,570) for “insulting and slandering a public official.” Working from information that was released as part of the “Panama Papers,” Unker published an investigation in the left-leaning Cumhuriyet newspaper that revealed that former Prime Minister Binali Yildirim and his two sons were tied to five offshore companies in Malta. She remains free pending her appeal.

“We had expected this sort of judgment,” Unker told DW shortly after her arrest. “It was already expected on the last day of the trial that there would be a sentence. Indeed, there was always the feeling that a defense was pointless. The judgment was predictable. Here, journalism itself was punished.”

The work must go on

One of the main victims of the crackdown on the media has been the people of Turkey as they are exposed to fewer critical voices. Not only has the Erdogan government closed media houses, it has also embarked on a campaign of media consolidation. Many influential newspapers and television stations are now owned by persons or companies friendly to the ruling Justice and Development Party (AKP), of which Erdogan is a part.

In March 2018, the sale of Turkey’s largest media group, Dogan Media Company, to the pro-government Demirören Holding was labeled the “death of media pluralism in Turkey” by Reporters without Borders (RSF). The sale included the daily Hürriyet (where Sedat Ergin continues to work as a columnist) and the 24-hour news channel CNN Türk (a joint venture with CNN).

“The government now has complete control of the media in the run-up to general elections in 2019. Amid an unprecedented crackdown on civil society and the political opposition, only a handful of low-circulation newspapers still offer an alternative to the government’s propaganda,” said Erol Önderoglu, RSF’s Turkey representative. 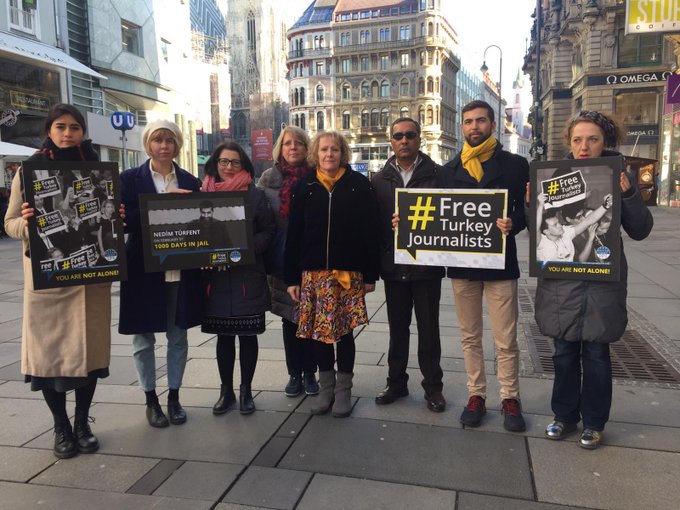 Today is 1000th day of journalist Nedim Türfent’s unjust arrest in #Turkey
-Jailed for 8y w/o credible evidence
-Denied right to attend own trial
-Witnesses say they were tortured into testifying against him
We stand for him, join us by signing our letter: https://freeturkeyjournalists.ipi.media/global-appeal-marks-1000-days-behind- …

Despite the crackdown on independent voices, reporters continue doing their work. Freelance journalist Tunca Ogreten was arrested in 2015 along with five other journalists and charged with “preventing or disrupting an IT system, amending or destroying data” and “committing a crime on behalf of a terrorist organization while not being a member.” The arrests were in connection with the publication of an article containing leaked e-mails from Energy Minister Berat Albayrak. Ogreten continues to publish stories, including for DW’s Turkish service, but he admits that the atmosphere makes it difficult to do the job.

“Journalists feel depressed, stressed and we all write with fear. But this is our job and some of us keep writing the truth,” he said. “But if you use any word to criticize the government or Erdogan you can be put in a prison. Any word!”

This stifling of critical reporting has real implications outside of the world of media. According to HRW’s Sinclair-Webb, the domination of the public sphere by pro-government media leads to an uneven playing field, especially in the run up to the upcoming local elections.

“It is not that people are not writing critical things but how much these voices are amplified,” she said. “You have to know which websites to go to and not everybody knows where to look.” 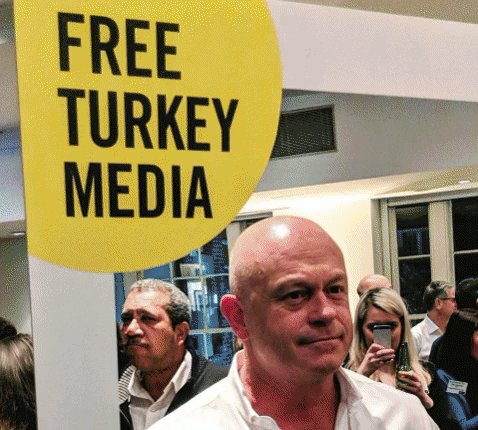 Next week is #WorldPressFreedomDay.

Journalists around the world are showing solidarity for jailed colleagues in #Turkey.

Journalists are not the only ones detained for being critical of the government or speaking out. The HRW World Report states that “thousands of people in Turkey faced criminal investigations and prosecutions for their social media posts.” The government has also blocked websites – including Wikipedia – and removed online content.

The crackdown on free expression and media freedom has meant that scores of journalists, writers, thinkers and academics find themselves either behind bars, charged with a crime or under a cloud of suspicion where any wrong move can lead to arrest. Many have left Turkey and continue to report from abroad while those who remain have adjusted their professional routines to this new reality.

“This has become part of life as a journalist,” said DW’s Unker following her conviction. “It’s already at the stage where we meet our friends and acquaintances in courtrooms.”

The rise and fall of liberal democracy in Turkey: Implications for the West
NAT 26th February 2019
Submit an Op-Ed
Tweets by NewsAboutTurke1