How repressive does a country have to be before it becomes a guilt trip for tourists?

How repressive does a country have to be before it becomes a guilt trip for tourists? 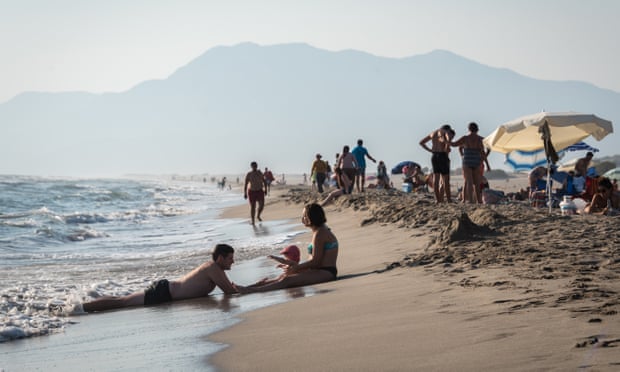 Go on, visit Turkey. For “fun, joy, happiness and neverending journey”. Women are allowed – to judge by the country’s tourism website – to laugh there now. Will it be safe? One hears these stories. Be reassured, says the useful tips section, this is one of the safest countries in the world: “You’ll find the police helpful and friendly.” Well, the ones who are left since the president, Recep Tayyip Erdoğan, dismissed a further 6,000 officers in last year’s purge.

There’s no section, as yet, dealing with the latest from the land of fun, joy and happiness: last week’s warning, by the minister of interior, Suleyman Soylu, to the effect that certain tourists could find themselves staying indefinitely. “Let them come and go to prison directly from the airport.”

But, to potential visitors whose question is now, “Does Mr Suleyman want to imprison me?”, the answer is probably no, not unless you’re a German Turk who opposes Erdoğan’s government. Or someone who has publicly approved or associated with those critics. Last year, Germany’s foreign office spokesperson, Maria Adebahr, warned the public: “Statements that are covered in Germany by freedom of expression can lead to prosecution in Turkey.” She calls Suleyman’s current threat “not helpful”. German reports of Suleyman’s statement have since been rubbished by a Turkish spokesman, as “deliberately taken out of context and distorted”.

For safety’s sake, it might still be advisable for aspiring tourists not to go on social media and call Erdoğan a brutal enemy of free speech, even in a country that had pretty much succeeded, before he came along, in keeping its genocidal history – the murder of a third of the population of Armenia – out of the public eye. “Who, after all,” Hitler asked in 1939, “speaks today of the annihilation of the Armenians?” Not the British government, which still, unforgivably, prefers the daintier “massacre”.

For most tourists, then, there is no compelling reason not to holiday in Turkey, whether out of caution or principle, since German-level freedom of speech is also threatened in a variety of popular, reliably hot resorts around the world. Supposing tourism confers respectability, Turkey’s buoyant figures suggest exceptional decency. If the country is also, following Erdoğan’s sustained assault on freedom of expression, bidding to become a world leader in the persecution of journalists – and, it follows, in undermining the judiciary – it is still, at 157 out of 180 in last year’s Press Freedom Index, ranked above Vietnam and China, both as popular with tourists as they are hostile to the free exchange of information.

For further travel whataboutery, recall the Trump-scarred US press (no 45). It is a principle dear to many adventurous travellers that, since no government is perfect, no government, even those famed for exceptional tyranny, should be subject to a tourism boycott. Or hardly ever. After Aung San Suu Kyi’s intervention, in 1996, asking tourists to shun “Visit Myanmar Year”, with which the military junta hoped to sanitise its reputation, visitors, with encouragement from NGOs, complied. Instead of 500,000 visitors, only 251,000 arrived.

Since then, with her silence on the purging and murders of the Rohingyapeople, Aung San Suu Kyi’s example may have become more useful to the visitors and tourism organisers who argue that – given an ethical approach – tourism can always be justified.

While dictators and juntas come and go, the case for visiting their lands has barely changed since Aung San Suu Kyi did, in fact, thwart the junta, despite additional resistance from, among others, Lonely Planet. The liberating benefits of international tourism to the oppressed include, it is argued, conversations, as well as, sometimes, cash. An ethical contributor to Condé Nast Traveller has made a persuasive case for “travelling with a conscience”. In Rodrigo Duterte’s Philippines, she writes: “I attended the public funeral of a man who’d been killed by police, and talked with mourners as they walked behind the hearse through the congested, sweltering streets of Manila.” Not an obvious bucket-list item, perhaps, but they used to say the same about bungee-jumping.

Assuming that compassionate funeral-crashing does transform routine into ethical tourism, you can still foresee problems of scale. Not merely because the supply of street funerals of innocent victims of authoritarian murderers is probably limited – although you could try Venezuela – but in pure organisational terms. How many coachloads of foreigners can reasonably attend one funeral? Plus, pressure of time. Is this, or indeed, any other extended form of anthropological exposure, how city-worn escapees to the sun would prefer to use the time designated “at leisure”? But either way, you can see how the justifications of individual guilt-tripped travellers to various autocracies can also be deployed by the organisers of industrial-scale all-inclusive tourism to morally indefensible dictatorships – that is, exactly the sort worth boycotting.

That Turkey combines the current terrors and imprisonings and arrests, its secular reversals and authoritarianism with a role as the UK’s third-favourite holiday destination, arguably owes much to the mind-broadening thinking that features ethical funeral-going. “Holidays to Turkey won’t break the bank,” chirped Thomas Cook last April, “and you’ll get incredible value for money with top quality All Inclusive hotels.” It is surely a further tribute to the destination that Erdoğan had enough confidence in these attractions, or their insulation from his state of emergency, to purge a further 18,632 state employees at the start of the season, including police officers, the military, teachers, academics.

As much as he is turning away from the west, it’s hard to believe that Erdoğan, presiding over a sagging economy, would be entirely content with the loss of legitimacy, as well as cash, if the hotels emptied, pending some restoration of democratic norms. What if these tourists chose, since boycotts can bring results, to go elsewhere?

All the more so if they went instead – as I warmly recommend – to Armenia.