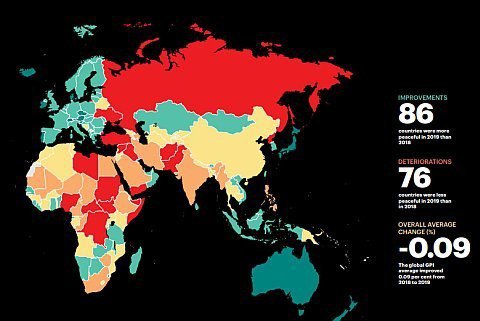 The thirteenth edition of the Global Peace Index has ranked 163 states and territories according to their level of peacefulness, covering 99.7 percent of the world’s population in that regard.

In the executive summary of the report, the IEP has indicated that “the average level of global peacefulness improved very slightly in 2019” and underlined that “this is the first time the index has improved in five years.”

“The average country score improved by 0.09 percent, with 86 countries improving, and 76 recording deteriorations,” the Institute has stated.

Turkey, which ranked 149th in the Global Peace Index 2018, has deteriorated by three ranks and has ranked 152nd in this year’s index.

Covering Turkey as part of Europe, the IEP has made the following comments on Turkey and its peace ranking:

‘Turkey has the worst terrorism score in Europe’

“Most aspects of the Safety and Security domain improved, especially political terror and the impact of terrorism. Most countries in Europe, apart from Turkey, register low levels political terror, which includes political imprisonment, disappearances and torture.

“Twenty-four countries had a reduction in terrorism impact in 2019, chief among them Cyprus, Bosnia and Herzegovina, Greece, Spain, Denmark and Turkey. Turkey has the worst terrorism score in the region.” (PT/SD)