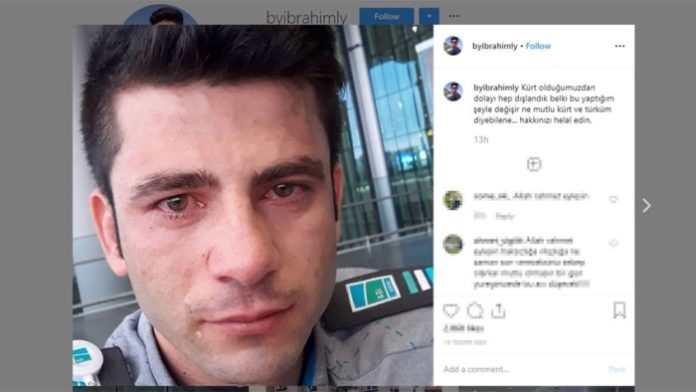 A Kurdish security guard working at İstanbul Airport committed suicide on Monday evening, jumping from an elevated area in an airport terminal and indicating the social exclusion he faced due to his Kurdish identity was the reason for taking his own life, according to Turkish media reports.

The young man, identified as İbrahim Layık, posted a selfie of himself and a message from his Instagram account two hours before he killed himself.

A red-faced Layık with tears streaming down his cheeks appears in the photo with a message that says: “We have always faced social exclusion for being Kurdish, perhaps things will change with what I am doing now. How happy is he who can say ‘I am a Kurd and a Turk.’ Goodbye.”

Ömer Faruk Gergerlioğlu, a member of the Turkish Parliament from the Kurdish Peoples’ Democratic Party (HDP) and a human rights activist, wrote about the background of the tragedy from his Twitter account on Tuesday.

He said he found that Layık decided to commit suicide when he was rejected by a woman who said she would never get into a romantic relationship with a Kurd.

Turkey is criticized for having depriving its Kurdish citizens, which make up around 20 percent of the country’s population, of their basic rights for years. Kurds have long been complaining about discrimination at the hands of the state and among the society due to their ethnic roots.