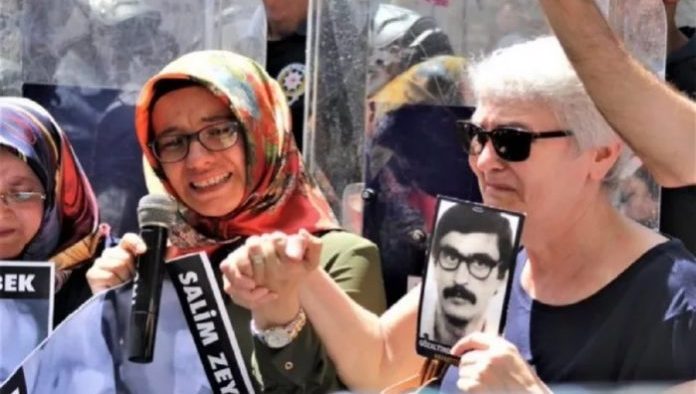 Saturday Mothers, a group of activists and relatives seeking the whereabouts of loved ones who disappeared while in police custody in the 1990s, held a protest on Saturday with the wives of abductees who were sought in investigations into the Gülen movement.

The Saturday Mothers, who first gathered on May. 27, 1995 in Galatasaray Square on İstiklal Street, has been the longest-running protest Turkey has ever witnessed. They protest questions unanswered by the authorities about the disappearance or unsolved murders of their loved ones after being taken by security forces, and the lack of justice in court.

More than 20 people have reportedly been abducted by Turkey’s intelligence agency in a massive post-coup crackdown targeting Gülen movement followers in the last three years.

Turkey accuses the movement of orchestrating a 2016 failed coup, although it strongly denies any involvement.

Some of the abducted suspects have returned to their families, while many of them are still missing. Two of the abducted Gülen followers told Correctiv, a non-profit investigative newsroom in Europe, they had been subjected to torture and ill treatment by intelligence officers at a secret site in Ankara. Ayten Öztürk, a woman investigated for membership in a leftist terrorist organization, also told the court that she was illegally kept under custody and tortured by intelligence agents.

The wives of Gökhan Türkmen, Yasin Ugan, Özgür Kaya, Ertan Irmak, Mustafa Yılmaz and Salim Zeybek have been attempting to determine their husbands’ whereabouts for more than four months, but state officials have reportedly not been of any assistance.

They attended this Saturday’s protest to raise awareness about the abductions.

“We are deeply concerned about secret detention sites, torture allegations and abduction cases. We won’t stay silent,” said a statement issued by the Saturday Mothers that also called on the justice minister to take steps to find the missing people.

“It’s a crime against humanity. One day we’ll hold those who committed these crimes accountable,” Kurdish deputy and human rights activist Sezgin Tanrıkulu said during the protest.