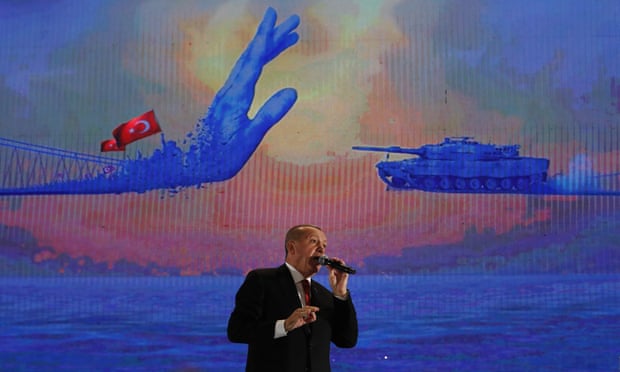 Trust in Turkey’s justice system is being undermined by the systematic dismissal and jailing of thousands of judges and prosecutors, an international coalition of lawyers has said.

The purge of officials launched by Recep Tayyip Erdoğan’s government in the wake of a failed coup in 2016 has led to suspects being convicted of terrorism “without credible evidence”, according to the Law Society, which has coordinated a submission to the UN.

A 25-page document sent to the UN human rights council calls for urgent action over the “widespread and systematic persecution of members of the legal profession in Turkey”.

There were already concerns about human rights violations prior to the failed coup in July 2016, the submission states, but since then the judiciary’s independence has been violated through the arbitrary arrest, detention and prosecution of lawyers.

In all, 4,260 judges and prosecutors have been dismissed. Of these, 634 were convicted on terrorism charges, the Law Society says. A further 1,546 lawyers have been prosecuted and 311 sentenced to a total of 1,967 years in prison.

Simon Davis, the president of the Law Society of England and Wales, said: “Judges’ and prosecutors’ independence has been systematically undermined in Turkey since the failed coup in 2016. Lawyers who can still practise report intimidation and threats.

“This menacing environment undermines the right of every citizen to legal representation and a fair trial, which may explain why Turkish citizens submitted more than 57,000 petitions to the European court of human rights in 2017. But that court will only take on cases where every domestic remedy has been exhausted, and it does not yet recognise that Turkish citizens have no effective domestic remedy, so they are being sent back to the Turkish courts in their thousands.”

Approximately 500 administrative personnel working for Turkey’s supreme court, the council of state, court of accounts and council of judges and prosecutors have been also dismissed, and only eight have been reinstated.

The report sent to the UN says: “Numerous legislative and constitutional amendments have given the government of Turkey unprecedented control over the judiciary and prosecutorial authorities, thereby undermining judicial and prosecutorial independence, as well as the rule of law.

“These amendments have been used to harass and persecute legal professionals, not only to suppress dissenting voices but also to restrict and criminalise work carried out by lawyers in the exercise of their professional duties. Within 24 hours of the attempted coup, 2,740 judges and prosecutors were suspended for alleged links to the Gülenist movement [the group allegedly behind the failed coup].”

The Turkish embassy press office in London has been contacted for comment.

Tags:
Previous Article
Erdoğan is on a lonely path to ruin. Will he take Turkey down with him?
Next Article
Turkey’s ruling party is splintering. Here’s why