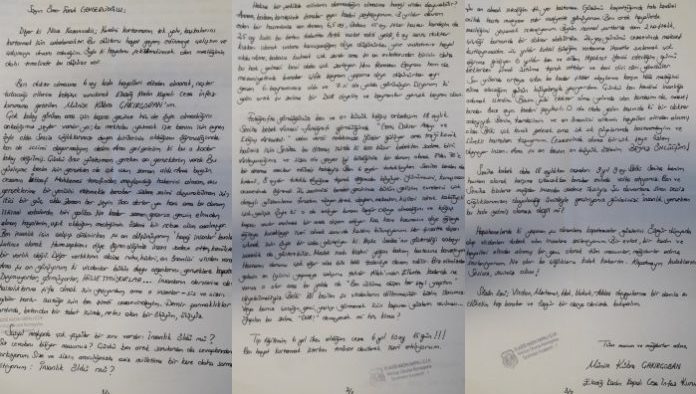 Münise Kübra Çakırçoban, a medical student who was put behind bars three years ago due to alleged links to the Gülen movement, has asked for justice in a letter from prison while lamenting the loss of days spent incarcerated when she was supposed to be doing her job, the Bold Medya news website reported.

Çakırçoban was 21 years old when she was arrested six months before graduation from a medical faculty. In a letter she wrote to Ömer Faruk Gergerlioğlu, a human rights activist and a deputy of the Kurdish Peoples’ Democratic Party (HDP), she explained how her dream of becoming a doctor was stolen from her and she was branded a terrorist.

“I lived to become a remedy for people’s problems and illnesses, but I am in jail now because those people remain silent. I am behind bars and I am like a dead body that breathes in a coffin. I would like to ask our nation through you: Has humanity died?”

The Turkish government accuses the Gülen movement of masterminding a failed coup attempt on July 15, 2016 and labels it a “terrorist organization,” although the movement strongly denies involvement in the coup attempt or any terrorist activity.

Çakırçoban said her mother was jailed for more than six months, her father for 15 months and her brother, who was also a medical student, was jailed for two-and-a-half months on the same charges and that their family was victimized by an ongoing government-led crackdown on alleged Gülen followers.

In her letter the young woman also talked about the tragedy of children who accompany their mothers in prison as there are more than 800 such youngsters in Turkey’s jails and attached a photo of her with a one-and-half-year old baby, named Seniha, taken in prison.

She said even Seniha understands that the prison is not a free world and tries to get out of the cell whenever the door is opened.

“I don’t know how many times I had to pick her up in in tears to prevent her from going out the cell door,” she wrote, asking if there is nobody who will say “stop” to all the tyranny taking place.

Çakırçoban said she was convicted of terrorism and given six years in jail, which was upheld by a regional appeals court, while Seniha’s mother was given nine years, nine months in prison on similar charges.

Following the coup attempt, the Turkish government launched a massive crackdown on followers of the movement under the pretext of an anti-coup fight as a result of which more than 130,000 people were removed from state jobs while in excess of 30,000 others are currently in jail and some 600,000 people have been investigated on allegations of terrorism.