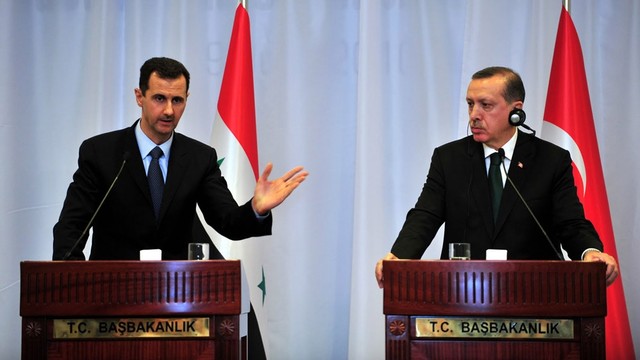 Putin informed al-Assad in a phone call about the provisions of the Russia-Turkey memorandum on actions in Syria following talks with Erdogan, Xinhua news agency reported on Tuesday.

The main task is to restore the territorial integrity of Syria and to continue joint efforts for a political settlement of the situation, including work within the framework of the Constitutional Committee, said Putin.

The Syrian president thanked Putin and expressed his full support for the results of the work.

The Syrian border guards are ready to enter the Syrian-Turkish border together with the Russian military police, he said.

Earlier, Russia and Turkey adopted a joint memorandum and agreed to deploy joint forces in zone of the Turkish operation in Syria starting from Wednesday.

“Starting 12:00 noon (0900 GMT) of October 23, 2019, Russian military police and Syrian border guards will enter the Syrian side of the Turkish-Syrian border, outside the area of Operation Peace Spring, to facilitate the removal of YPG (Kurdish People’s Protection Units) elements and their weapons to the depth of 30 km from the Turkish-Syrian border, which should be finalized in 150 hours,” the document published on the Kremlin’s website said.

“At that moment, joint Russian-Turkish patrols will start in the west and the east of the area of Operation Peace Spring with a depth of 10 km, except Qamishli city,” it added.

Both parties will take the necessary measures to prevent the infiltration of terrorism, the memorandum said.

A joint monitoring and verification mechanism will be established to review and coordinate the implementation of this memorandum, it said.

To achieve “lasting and long-term stabilization in Syria as a whole” is possible only subject to the sovereignty and territorial integrity of the country, Putin stated during the press conference following the talks with Erdogan.

“We share the concern of the Turkish side in connection with the increasing threat of terrorism and the growth of ethno-confessional contradictions in this region. In our opinion, these contradictions and separatist sentiments have been artificially fueled by outsiders recently,” he noted.

Syria must be exempted from an illegal foreign military presence, said Putin.

Erdogan praised the agreement for stopping “the creation of any separatist manifestations” on the Syrian territories.

“Both Turkey and Russia, we will not allow this,” the president said following talks with Putin.

“The operation is canceled. Everything will depend on how the agreements are implemented, including on the withdrawal of weapons and the withdrawal of forces and means of the Kurdish units,” Lavrov said in footage published by the Russian Foreign Ministry.

On October 9, Turkey launched a military offensive dubbed “Operation Peace Spring” in northern Syria bordering southern Turkey in an attempt to fight Kurdish forces, which are deemed by Ankara as separatists and terrorists.

Following the Turkish action, the Kurdish Autonomous Administration of North and East Syria said on Oct. 13 that it had reached an agreement with the Syrian government, backed by Russia, allowing the Syrian army to assume control of some Kurdish-held areas to counter Turkey’s military progress.