Despite the rapid rise in Covid-19 cases in Turkey, the government is still dealing harshly with prisoners, reports Nora Koloyan-Keuhnelian

Aygun’s posts were critical of Erdogan’s measures designed to counter the coronavirus outbreak in the country.

The arrest came at a time when the Turkish parliament’s justice committee has approved a bill that will allow the release of up to 100,000 prisoners due to the Covid-19 outbreak, though it excludes those imprisoned on terrorism charges.

The international rights groups Human Rights Watch (HRW) and Amnesty International along with several European Parliament officials have called on the Turkish government to release all the political prisoners in the country to stem the spread of Covid-19 inside prisons.

“While humanity is going through one of the most difficult phases in history, the Turkish government is still jailing journalists for reporting on coronavirus and excluding political prisoners and critical journalists from the current amnesty bill being discussed in the Turkish parliament,” Ilhan Tanir, a Washington-based editor at AhvalNews, told Al-Ahram Weekly.

The bill was proposed by the ruling Justice and Development Party (AKP) and its ally the Nationalist Movement Party (MHP). Other opposition parties included some amendments to the bill, but these were rejected. The bill will be put to a vote soon.

Most journalists, politicians and human-rights defenders in prison in Turkey will not benefit from the new law. They are accused of having links to the Kurdistan Workers Party (PKK) or the Gulen Movement that Turkey considers to be a terrorist organisation and responsible for the 2016 failed coup, despite a lack of evidence. 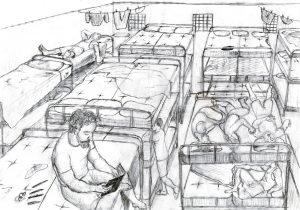 “This is very unjust treatment, and one which could potentially kill many of the people rotting in jails simply due to their disagreements with the Turkish government,” Tanir told the Weekly.

Among the political prisoners are people aged over 60, including businessman and civil society figure Osman Kavala and journalist Ahmed Altan. Politicians who are in prison include co-leader of the pro-Kurdish People’s Democratic Party (HDP) Selahattin Demirtas, who is on medication, and Gultan Kisanak of the Peace and Democracy Party (BDP).

Turkey has more crowded prisons than many other countries. In response to the coronavirus pandemic, Turkey’s Justice Ministry has cancelled visits to prisons throughout the country.

Meanwhile, a member of a popular folk music band, Helin Bolek, 28, has died on the 288th day of a hunger strike protesting against the imprisonment of band members. Grup Yorum, founded in 1985 and known for its protest songs, has been prohibited from performing in Turkey since the failed coup.

Bolek and band guitarist Ibrahim Gokcek were forcibly hospitalised by police last month but were released a week later after they refused treatment. A delegation of human-rights activists met with the deputy Turkish interior minister to seek a solution to end the hunger strike, but activists said the government had refused to assess the demands until the protest was called off.

“All Helin wanted was to sing her songs. AKP fascism is responsible for her death. The demands were very simple,” the Free Grup Yorum solidarity committee tweeted.

At the same time, a video went viral on Turkish media of a new song called “Go corona, go viral” performed by popular singer Fikret Simsek who said in the song that he wanted to see the virus hit Turkey’s enemies, including Greece, Russia, Syria, Egypt and the US.

It seems that some parts of the world are still spreading hatred despite the present pandemic. “It is awful, but I don’t blame them as it’s the atmosphere they have lived and grown up in,” said one human rights activist based in Istanbul who preferred to remain anonymous.

“It is ironic that members of a musical band like Grup Yorum are still in jail and singers like Simsek are free to produce and distribute hate songs in these difficult times,” the activist told the Weekly.

Simsek appeared to be performing in the open air in his video, with others repeating the song’s refrain. All were wearing masks.

The number of infections of Covid-19 in Turkey continues to rise. The first case was reported on 11 March, and the virus had claimed the lives of 649 people as of Tuesday this week. The country has confirmed 30,217 coronavirus cases, and according to Johns Hopkins University data in the US, Turkey has the ninth-highest number of cases worldwide.

“The government still has not imposed a full lockdown like in the European countries, and the political opposition and even doctors are criticising Erdogan, saying that more precautions need to be taken,” the human rights activist told the Weekly.

On Monday, Erdogan announced the building of two hospitals in Istanbul to help accommodate the rapid rise in Covid-19 cases in the country.