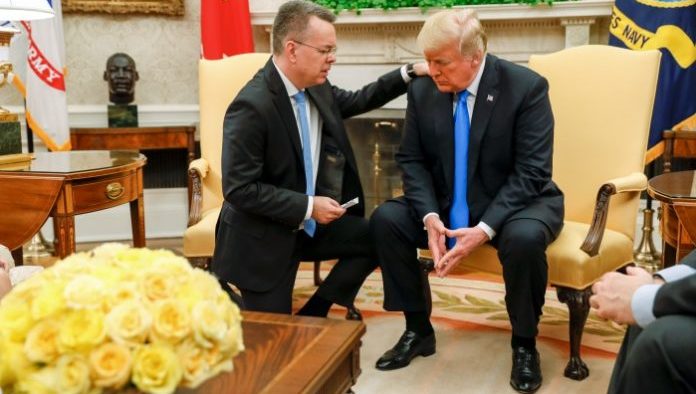 The United States Commission on International Religious Freedom (USCIRF), an independent, bipartisan federal government entity established by the US Congress to monitor, analyze and report on threats to religious freedom abroad, recommended in its recently published 2020 Annual Report that Turkey be placed on the US State Department’s Special Watch List (SWL) for severe violations, the Stockholm Center for Freedom reported.

According to the report, “[i]n 2019, religious freedom conditions in Turkey remained worrisome, with the perpetuation of restrictive and intrusive governmental policies on religious practice and a marked increase in incidents of vandalism and societal violence against religious minorities. As in previous years, the government continued to unduly interfere in the internal affairs of religious communities by preventing the election of board members for non-Muslim foundations and introducing new limitations on the long-delayed election of the Armenian Apostolic Church’s patriarch.”

“Many longstanding issues concerning religious sites, such as the inability of the Greek Orthodox community to train clergy at the Halki Seminary, remained unresolved.”

The report pointed to the propagation of anti-Semitism and hate speech by officials, the continued existence of a blasphemy law and the lack of an alternative to mandatory military service for conscientious objectors as shortcomings in the enjoyment of freedom of religion in Turkey. “Government officials and politicians continued to propagate expressions of anti-Semitism and hate speech, and no progress was made during the year to repeal Turkey’s blasphemy law or to provide an alternative to mandatory military service and permit conscientious objection.”

The persecution of Gülenists in Turkey is also a matter of concern for the commission. “Throughout the year, the Turkish government continued to dismiss, detain, and arrest individuals affiliated with, or accused of affiliation with, the U.S.-based cleric Fethullah Gülen, for alleged complicity in a July 2016 coup attempt or involvement in terrorist activity.”

The commission had also underlined the Gülenist persecution in its 2019 Annual Report. “Followers of U.S.-based cleric Gülen have faced increased persecution by the government. In the two years since the failed coup attempt in 2016, the Turkish government has embarked on a purge of those affiliated with Gülen, resulting in the dismissal, detainment, and arrest of tens of thousands of individuals. The government continued to allege that Gülen and his followers were behind the plot to overthrow the government, although only a small minority has been charged with participation in the coup attempt. The government labelled Gülen and his followers a terrorist organization in May 2016, and refers to them as the Fethullahist Terrorist Organization (FETÖ).”

The 2020 Annual Report further recommended six non-state actors be designated as “entities of particular concern” (EPCs) for “systematic, ongoing, egregious violations.” The recommended EPCs comprise al-Shabaab in Somalia, Boko Haram in Nigeria, the Houthis in Yemen, the Islamic State in Khorasan Province (ISKP) in Afghanistan, the Taliban in Afghanistan and Hay’at Tahrir al-Sham (HTS) in Syria.

The annual report commended the “upward trend” in two countries in terms of freedom of religion: Sudan and Uzbekistan. “Sudan stands out, demonstrating that new leadership with the will to change can quickly bring tangible improvements. Uzbekistan also made important progress in 2019 toward fulfilling the commitments it made to allow religious groups greater freedom. Though other countries deteriorated, particularly India, we see international religious freedom on an upward trajectory overall,” USCIRF Chair Tony Perkins said.

“On the other hand, India took a sharp downward turn in 2019. The national government used its strengthened parliamentary majority to institute national-level policies violating religious freedom across India, especially for Muslims,” according to the annual report.

Tags:
Previous Article
The lira’s past 7. Now don’t be a tough guy Erdogan, don’t be a fool!
Next Article
Turkish journalist Fatih Portakal charged for tweet about president’s speech