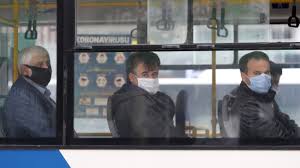 Now, with the coronavirus pandemic and the economic crisis, Turkey has itself become a hostage.

Two years ago Nate Schenkkan, a project director at Freedom House, claimed that hostage-taking had become Turkey’s new foreign policy. He referred to the attempt by Turkey to use the arrest of German-Turkish journalist Deniz Yucel, American pastor Andrew Brunson and other American citizens as leverage to secure concessions from Germany and the US.

In the case of pastor Brunson, this backfired. President Trump imposed sanctions on Turkey that contributed to the lira’s collapse and the pastor’s release. Now, with the coronavirus pandemic and the economic crisis, Turkey has itself become a hostage.

Since the advent of the ruling AKP (Justice and Development Party) in 2002, Turkey’s growth has been marked by credit-fueled construction rather than production. There has been an improvement in infrastructure, such as roads and bridges. At the same time there have been a number of prestige projects, including the third bridge over the Bosphorus and a third Istanbul airport built with state guarantees. This has in particular benefited a select number of construction companies, giving rise to “crony capitalism.”

In 2014, economic analyst Jesse Colombo pointed out in Forbes that Turkey’s economic boom was a credit-driven bubble predicated on ultra-low interest rates.

He also warned that the lira’s weakness was the precursor to Turkey’s coming economic bust, to which we are now witness. Some $173 billion in foreign-currency debt falls due this year but the cupboard is bare.

President Recep Erdogan’s aversion to interest rates is well known. During the Gezi Park uprising in 2013, he railed against “the interest-rate lobby,” also touting his preference for sukuk, Islamic bonds.

Likewise, his belief that the best way to reduce inflation is the reduction of interest rates. Last July the benchmark lending rate in Turkey was 24%, but the appointment of a more pliant governor of the central bank has led to a gradual reduction. It was recently reduced to 8.75% percent against an inflation rate of 11.9%, which gives a negative real interest rate.

The president’s son-in-law, Berat Albayrak, is minister of the treasury and finance, but before last year’s local elections, his father-in-law made clear, “I’m in charge of Turkey’s economy.” However, when Erdogan was prime minister, The Wall Street Journal had already found him “a systemic risk.”

TWO YEARS ago, the lira fell to 7.28 to the dollar, and since March Turkey has gone through about a third of its gross forex reserves in defense of the lira. However, its net reserves minus liabilities have dropped to below zero, and the lira has again dropped to seven to the dollar. Now there is talk of capital controls, and a popular TV journalist has been prosecuted for suggesting the government might seize bank deposits.

The coronavirus pandemic has imposed an additional burden on Turkey’s economy, which has caught Erdogan between a rock and a hard place. Rather than follow an effective strategy, such as that followed by Singapore, South Korea and Taiwan, Turkey has resorted to half-measures, such as a curfew for those under the age of 20 and over 65.

There have been three weekend lockdowns, the first of which was announced with two hours’ notice, resulting in thousands of last-minute shoppers who ignored social distancing.

The government has doubled its original $15-billion financial-support package, but this has limited effect. Erdogan has also launched a national solidarity campaign that has raised $260 million in contributions, mainly from public institutions and businessmen close to the AKP. Municipalities controlled by the opposition CHP (Republican People’s Party) have been prevented from similar fund-raising, as Erdogan has claimed this was an attempt to create a parallel state.

Likewise, there has been a crackdown on critical voices, and 402 people have been detained for “false and provocative” social media posts on the government’s handling of the pandemic. At present, there are 122,392 confirmed cases of COVID-19 in Turkey, the hardest-hit country in the Middle East.

Masks are mandatory when shopping and on public transportation. Although masks are now provided for free, there are distribution problems. At the same time, medical organizations have complained over the shortage of PPE (personal protective equipment), as healthcare workers have become infected. Nevertheless, Turkey has provided medical equipment to 57 countries to combat the COVID-19 pandemic.

In particular, there has been a much publicized airlift of 500,000 surgical masks, 4,000 pairs of overalls, 2,000 liters of disinfectant, 1,500 goggles, 400 N-95 masks and 500 face shields to the US. Together with the shipment was a letter fromErdogan to his “dear friend” Donald Trump, assuring him that Turkey is “a reliable and strong partner of the US” and would continue to demonstrate solidarity.

Erdogan has rejected the option of a standby loan from the International Monetary Fund. Perhaps he hopes for a swap deal with the US Federal Reserve.

By: ROBERT ELLIS
The writer is a member of the advisory board at Vocal Europe in Brussels.
Source: Jerusalem Post
Tags:
Previous Article
Erdogan Faces His Biggest Test of the Pandemic: The Economy
Next Article
Another member of Grup Yorum band dies after hunger strike