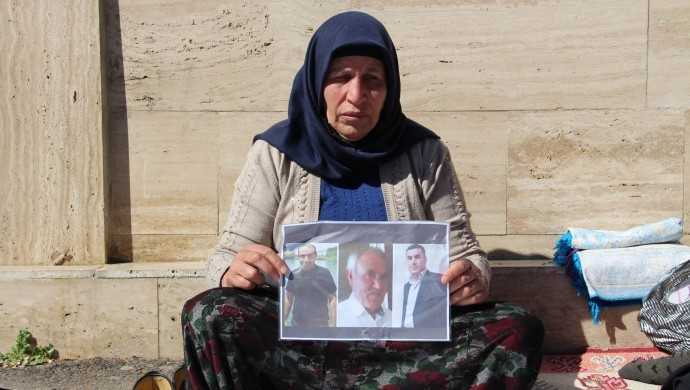 TURKISH police detained a Kurdish woman as she marked seven days of a sit-in vigil outside the Sanliurfa courthouse in Turkey today.

Emine Senyasar is demanding justice for family members who were brutally killed by government supporters in June 2018, days before the country went to the polls in presidential and parliamentary elections.

Her husband, Haci Esvet Senyasar, and two of her sons, Adil and Celal Senyasar, were killed by the bodyguards and relatives of Justice & Development Party (AKP) parliamentarian Ibrahim Halil Yildiz.

His armed thugs opened fire after an argument with shopkeeper Celal, known for his closeness to the Peoples’ Democratic Party (HDP), over a red, green and yellow banner, colours associated with Kurdish culture.

Celal was killed after telling the AKP supporters: “We will not vote for you” and traders intervened with wooden sticks and knives after he was slapped by the candidate’s brother Mehmet Ali Yildiz, who was also shot dead.

Adil was killed in the local hospital, where he was beaten to death with an oxygen cylinder, and father Haci Esvet Senyasar was also attacked there and later died.

Turkish President Recep Tayyip Erdogan, desperate to keep the HDP below the 10 per cent threshold required for a party to have its candidates elected to parliament, has been blamed for inciting the bloodbath. The attacks came just a day after he told a meeting of local businessmen to target the HDP —  “You know who is in your neighbourhoods, do what is necessary,” the AKP leader reportedly said.

Nobody has been brought to justice for the murders nearly three year after the incident occurred.

Ms Senyasar has been joined by her surviving son, Ferit, in her daily campaign for justice. But they have faced intimidation and threats, despite their vigil being peaceful, with police constantly trying to move them on.

She was charged with “insulting a public official” but rejoined the vigil after her release this afternoon.

Tags:
Previous Article
Doctor suspended for sharing information about a sick inmate with his family
Next Article
Can the Biden administration help save Turkey’s democracy? – by Asli Aydintasbas

Can the Biden administration help save Turkey’s democracy? – by Asli Aydintasbas
NAT 15th March 2021
Submit an Op-Ed
Tweets by NewsAboutTurke1