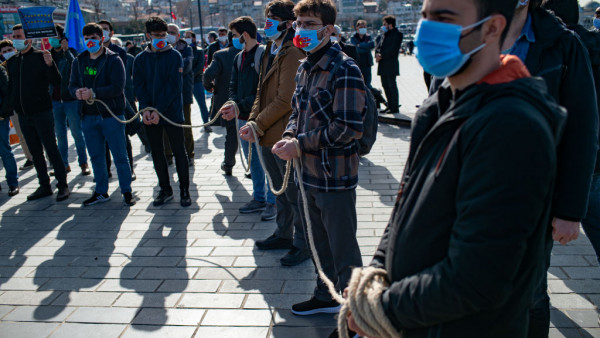 Through its systematic attempt to silence and eliminate Uighur cultural identity in the Xinjiang province, China has been embarking upon projects that criminalise Uighur activities in order to cleanse the Muslim minority of its particularism.

The Chinese government’s relentless advance on the Uighur heartland is set to engulf not only its language but radically reshape every cultural and social marker of its indigenous people.

In four short years since Xi Jinping tightened his grip on the Xinjiang Uighur Autonomous Region, (XUAR) hundreds of academics, poets and musicians have been interned or simply disappeared, the Uighur language has been sidelined, and the cultural and religious landscape systematically re-written, dismantled or repurposed.

A landmark forum of international academics, activists and politicians gathered recently at the UK’s Newcastle University, home of recently CCP-sanctioned Xinjiang academic Professor Jo Smith Finlay, to highlight the abuses meted out on the Uighurs and to assess evidence of genocide on the Turkic peoples of North-West China.

Suspicions that the Chinese government is intent on cutting a swathe through Uighur cultural heritage were raised by prominent experts in the field; ASPI (Australian Social Policy Institute) researcher Nathan Ruser, Uighur Manchester academic Ablimit Baki Eltrish and Jo Smith Finlay from Newcastle, whose findings are consistent with orders from the top to break the roots and lineage of Uighurs in Xinjiang.

Using satellite imagery, Ruser’s team estimates that despite CCP denials, approximately 16,000 mosques in Xinjiang (65 percent of the total) have been destroyed or damaged since 2017.

Under the new Xinjiang provincial governor Chen Quanguo, who took office in 2016 after his tour in Tibet, they calculate an estimated 8,500 have been demolished outright, leaving vacant plots, and a further 30 percent of important Islamic sacred sites (shrines, cemeteries and pilgrimage routes, including many protected under Chinese law) have been razed. An additional 28 percent have also been damaged or altered in some way.

The demolition of the isolated Ordam Mazar (Royal City Shrine) in 2017, stood out to Ruser as an example of the extraordinary lengths by the government to extinguish all vestiges of its existence. The shrine, credited with being the place from which Islam spread throughout the region was flattened in the space of a month by bulldozers which had been despatched 20 miles along unmade tracks and around sand dunes into the Great Bughra desert between Kashgar and Yarkand, to wipe out every one of the fifty structures of the small settlement.

The area had already been closed in 1997 amid a campaign to ban illegal religious activities and “feudal superstition” and visits had petered out. The site’s wanton destruction and that of other shrines on a 15-day pilgrimage route which for centuries had connected sacred sites in and around the desert served no purpose according to Ruser other than  the “curtailing of religious freedoms in Xinjiang” and “the deliberate severing of ties that Uighurs have to their cultural heritage, history, landscape and identity.”

The significance of the simultaneous disappearance of Rahila Dawut, famed folklorist and chronicler of Xinjiang’s shrines, as the Ordam was being destroyed in December 2017, was not lost on Ruser.

“The demolition of Ordam Mazar and the disappearance of a world-renowned researcher of Uighur sacred spaces highlights the extent that Xinjiang’s public spaces of faith and identity have been targeted and outlawed,” he concluded. “This highly sacred site for the Uighur people, which had fought back the desert and multiple rounds of conquest for over 1,000 years, has now been subsumed back into the desert.”

An accelerated sinicization drive since Xi Jinping’s re-election in 2018 as president for life has seen familiar and age-old Uighur traditions incrementally eaten away. Not only have hundreds and thousands of Uighurs disappeared or been interned, but their lives have been beset by the daily indignities of surveillance, mass sterilisation, abduction of their children to state orphanages, and a raft of measures to dilute their culture, religion and language.

The CCP’s determination to “modernise” Uighurs have been well documented by researcher Timothy Grose who has traced the CCP’s efforts to “beautify” Uighur women by relieving them of headscarves and long skirts. The multi-million dollar “Project Beauty” drive launched in 2011 to persuade Uighur women to “let their hair down and show off their pretty faces,” gathered momentum when 2015 legislation banned clothing that masked the face or robed the body. Subsequent laws followed suit by forbidding headscarves entirely.

The year 2019 saw the “Three News” campaign requiring Uighurs and other Muslim minorities to “modernise” their homes by abandoning the rugs and pillows they traditionally use as furniture and replacing them with sofas, beds, and desks. According to a Radio Free Asia report, detailed instructions on how to advocate for a “new lifestyle,” establish a “new atmosphere,” and construct a “new order” in rural villages across southern Xinjiang were handed out to four hundred thousand “impoverished families” chosen to have their homes transformed and “beautified”.

The “major success” of this, according to the official Aksu Daily, lead to the “Three Separates” campaign, which required household courtyards to include an animal pen, a vegetable garden, and a paved veranda, as part of a bid to ensure that neighbourhoods were “hygienic and beautiful.” Those who refused to comply within three days were threatened with “re-education.”

Not content with reshaping culture, the CCP’s attack on the Uighur language and educational structure has been relentless.

Uighur Ablimit Baki Elterish, an academic at Manchester University has witnessed the sinification of his homeland with despair and great sadness. Noting the increasing preponderance of red flags and Chinese lanterns, Chinese cultural symbols and festivals imposed on Uighur neighbourhoods, and the disappearance of Uighur medium nurseries and schools he concludes that policies in Xinjiang point strongly in the direction of assimilation. Uighur cultural monuments have been subsumed by memorials to Chinese heroes with no connection to the area, and signage, once at least bilingual, is now predominantly Chinese.

A few changes have caused Elterish as much distress as the transformation of the revered Apak Hoja Mausoleum, a seventeenth-century complex for the final resting place of Quranic scholar Yusef Khoja, into a theme park commemorating Xiang Fei, a Uighur concubine (Uighur name Iparhan) who captured the heart of a Qing Dynasty emperor in the eighteenth century and was transported to Beijing.

According to Uighur scholars, far from being the much-vaunted symbol of unity between Han and Uighur, she in fact committed suicide and was buried in Beijing, and not returned to lie in state in the Mausoleum. A Disney-esque entrance masks the religious symbolism of the mausoleum and is used to celebrate mixed-race marriages in Han cultural style.

“Islamic names are replaced by Han names, Uighur folklore, poetry and literature has disappeared and Xinjiang’s unique geographical characteristics and fruit have all been replaced by those from inner China”

Together with the inexorable dismantling of Xinjiang’s culture, “linguicide” is not far behind, conclude Jo Smith Finlay, Uighur academic Dilmurat Mahmut and Hanna Burdorf who have collaborated in an in-depth analysis of the “invisiblisation” of Turkic languages in the province. The Chinese language has now been renamed as “Guo yu” (national language) rather than as previously “Han yu”, the language of the Han and the term “bi-lingual” education has been replaced with “national language education.” All children must now be taught in Mandarin, and Uighur, Kazakh and Kirghiz medium education have ceased.

Suspended death sentences were handed down to Sattar Sawut and his deputy, Shirzat Bawudun, former directors of the Xinjiang education department for charges including writing and publishing school textbooks it said were designed to “split the country”.

According to Xinhua, the Chinese government news agency, Sattar was accused of building a team and planning with his deputy to incorporate “bloody, violent, terrorist and separatist ideas” in primary and secondary school textbooks from 13 years ago. Dating back to 2003 and 2016, the content despite having been passed by the government censors was deemed by Xinjiang authorities to be “separatist” in nature and inciting ethnic hatred.

Through analysis of successive editions of primary school Uighur textbooks, Smith Finlay chronicled incremental changes in the portrayal of Uighur culture through subtle alterations in clothing, facial features and hairstyles of the children portrayed, which she observed became more Han as the years went by.

Chinese children are surrounded by Chinese emperors and national heroes, Uighur, particularly Islamic names are replaced by Han names, Uighur folklore, poetry and literature has disappeared and Xinjiang’s unique geographical characteristics and fruit have all been replaced by those from inner China.

She concluded that the inroads into Uighur culture and language all point towards targeting the younger generation with the intent to eventually eradicate the Uighur people as a separate ethnic group, nation and culture. “This embodies the state’s deliberate intention to “invisibilise” Xinjiang as a separate homeland with unique and distinct characteristics,” she said.

Uighurs can no longer try to “bypass” China in forming allegiances with their Muslim “cousins,” and must only deal with non-threatening secular nations, she added, citing the danger Uighurs now face by siding with their Islamic allies in the Turkic, Central Asian or Arab world.

Uighurs are no longer members of their own characteristically unique homeland with a rich culture and heritage unique to them. “They are inextricably part of Han China,” said Smith Finlay. “And loyal assimilated members of the Han-majoritarian Chine state.”

The author is writing under a pseudonym to protect her identity