Zehra Dogan: Turkey’s rebel with a pen and a paintbrush

Zehra Dogan: Turkey’s rebel with a pen and a paintbrush 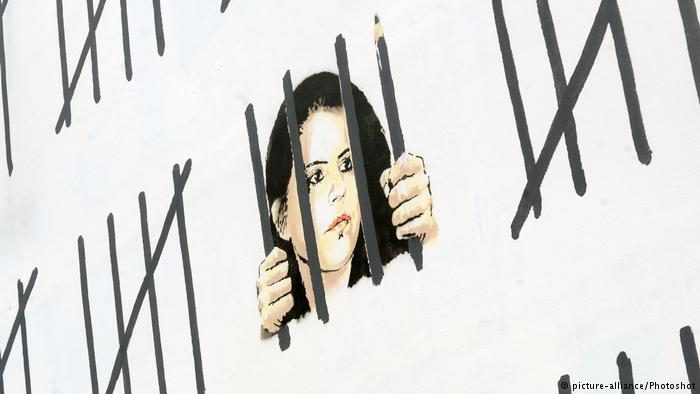 Kurdish artist and journalist Zehra Dogan went to prison for portraying life in southeastern Turkey during the country’s state of emergency. Now she is free, and has no plans to give up her fight against injustice.

Why did you paint a picture of destroyed houses with a Turkish flag? That is the question authorities asked Kurdish artist and journalist Zehra Dogan when she learned she was going to jail for her paintings, articles and social media posts. “Then they threw me in prison,” she said. “But they are the ones who created this picture — I only illustrated it.”

Imprisoned twice for alleged terrorist ties, Dogan was recently released on February 24. It’s a time of emotional turmoil, she told DW, adding that she feels terrible because she had to leave behind the other women in her prison.

Zehra is imprisoned because she drew a painting of this famous photo. The court calls the painting “terrorist propaganda”

“I woke up in the middle of the night and had to remind myself that I was no longer in prison,” she said about her first night of freedom.

Read more: A return to dark days for journalists in Turkey

“In prison, I told the children fairy tales, I sketched my friends who were on hunger strike and I was glad to have something to keep me busy,” she said. “Once you get used to something, you think: ‘This is my life from now on’ — I had gotten used to prison and now I’m thinking about what I can do in the future.”

Born in 1989 in Diyarbakir, in southeastern Turkey, Dogan studied art at Dicle University and planned to be a teacher. At the time, she had no idea that she was about to find another passion.

Dogan never stopped painting, but she was also keen to report on the everyday lives of Kurds in southeastern Turkey. In 2012 she co-founded JINHA, Turkey’s first women-only news agency. Three years later, Dogan won the Metin Goktepe Journalist Award for a report on Yazidis in Sinjar. She worked as a reporter and editor at JINHA until the 2016 coup attempt in Turkey. The Turkish government terminated the peace process with the Kurds in 2015, and JINHA was one of the media companies banned by special decree during the state of emergency that followed the coup attempt the next year. There were once again riots and military interventions in the southeast of the country, which affected the work of journalists in the region. Curfews were imposed in the wake of clashes between the Turkish army and the Kurdish PKK. Dogan was busy in the Nusaybin district of the provincial capital Mardin at the time — painting houses with Turkish flags.

Because of her social media posts, articles and artwork, Dogan was charged with membership in a terrorist organization. She was arrested and detained in Mardin on July 23, 2016, but released again in December after her first hearing.

Read more: An ongoing crisis: Freedom of speech in Turkey

Soon after, the paintings she made in prison were on show in an exhibition entitled 141 — the number of days she was behind bars. 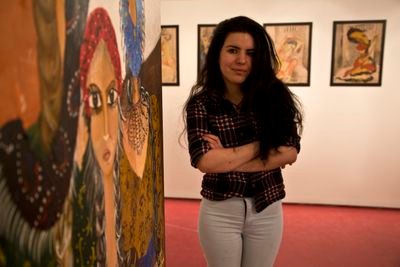 Works by @zehradoganjinha are on display in France for the Festival des Autres Mondes. It has now been over a year and a half since she was sentenced to prison. We continue to call for her immediate release. Learn more about Zehra: http://bit.ly/ZehraDogan  #ArtIsNotACrime

Her plight was not over, however.

The original terrorism charges were dropped, but security forces arrested her once more on June 2, 2017, charging her this time with spreading terrorist propaganda. The 141 exhibition toured across Europe while Dogan was in prison in Diyarbakir

Her arrest drew international condemnation, most prominently from well-known British street artist Banksy. In 2018, he drew a mural in New York depicting Dogan behind bars, with the words “Free Zehra Dogan.” Dogan was so touched by Banksy’s tribute that she wrote him a thank you letter she had smuggled out of prison.

That same year, the International Women’s Media Foundation awarded Dogan the Courage in Journalism Award for her reports from Cizre and Nusaybin. Beyond the prison walls, Dogan’s supporters campaigned for her release. Inside prison, meanwhile, Dogan faced a special challenge: She was not allowed to have paint. So she used menstrual blood instead, Dogan said after her release. She even knew her cell neighbors’ menstruation cycles, she told DW.

“I gave them cans they filled with their blood,” Dogan said. When one of the guards told her the staff was disgusted by her use of menstrual blood to paint, and that she should stop, she demanded they giver her paint. A few days after that conversation, Dogan was transferred to a different prison.

Dogan said that during her time behind bars, she couldn’t imagine being free again. Now that she is finally out, she is ready to get back to work. “You know, journalism is addictive,” Dogan said. “Fortunately, journalism exists.”