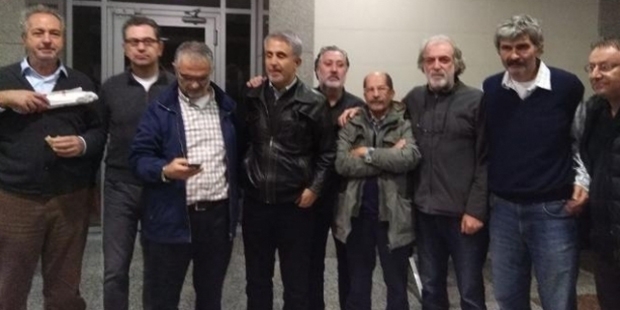 ISTANBUL (Reuters) – Six staff of Turkey’s opposition Cumhuriyet newspaper were sent to jail on Thursday to serve out the remainder of their sentences from a trial on terrorism charges, two of their lawyers said.

Fourteen staff of Cumhuriyet – one of the few remaining voices critical of the government – were sentenced last April to jail terms of up to eight years and one month on charges of terrorism and supporting U.S.-based cleric Fethullah Gulen, blamed for organizing the 2016 attempted coup. [nL8N1S27U8]

All the defendants, some of whom had been in prison for the duration of the trial, had been released pending an appeals process. In February, another court rejected their appeals.

All the accused have denied the charges against them and argue the case is political and aimed at silencing opposition voices. Gulen denies any involvement in the coup attempt.

Tora Pekin, a lawyer for the defendants, said during a news conference on Monday that the appeals court had not granted their request for a hearing ahead of deciding whether to uphold the sentences.

Abbas Yalcin, another lawyer, said they had requested the sentences be suspended and were waiting for the request to be evaluated by the court.

Human rights organizations have voiced increasing concern about media freedom in Turkey, accusing Erdogan of using the abortive putsch as a pretext to quash dissent.

Since the failed coup, more than 77,000 people have been jailed pending trial, while about 150,000 civil servants and military personnel have been sacked or suspended from their jobs. Widespread operations and arrests are still routine.