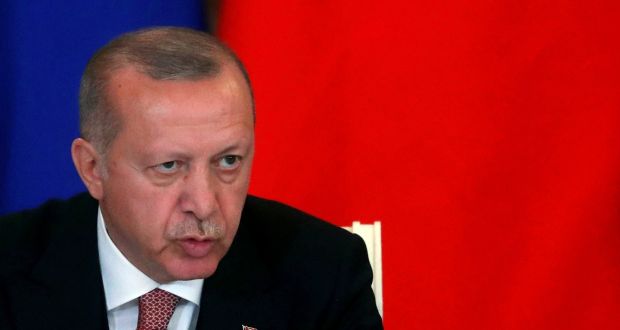 The commission criticised the move to annul the mayoral vote in Istanbul in March won by the opposition after 25 years of rule by Turkish president Recep Tayyip Erdogan’s AK Party and its Islamist predecessors. Photograph: Reuters

Turkey’s hopes of joining the European Union are fading, the bloc’s executive said on Wednesday.

The European Commission blamed authoritarian rule for deteriorating conditions in courts, prisons and the economy. Turkey is still considered a security ally, but its candidacy to join the world’s largest trading group is frozen because of “further serious backsliding” on rights, the judiciary and economic policy, said the commission in its annual progress report.

The report, which EU governments are set to approve in June, cements a growing sense in the West that Turkey has veered worryingly away from the market reforms of the early 2000s as President Recep Tayyip Erdogan consolidates power.

A crackdown following a failed coup in July 2016, a shift to a powerful presidential system with few checks and balances and closer ties with Russia have alarmed western leaders and financial markets alike, sending the value of the lira tumbling.

“Turkey has continued to move further away from the European Union,” noted the commission in its report on Ankara’s progress towards membership, a path formally undertaken in 2005.

“Negotiations have . . . effectively come to a standstill,” the commission added of Turkey, a member of the US-led Nato alliance which shares a border with Iraq and Syria.

Turkey’s government chafed at the report. It has previously said it is a victim of anti-Muslim sentiment in the EU and justified crackdowns on the alleged threat from militants at home and abroad,

“It is not possible for us to accept the unfair and disproportionate criticisms in the report,” said deputy foreign minister Faruk Kaymakci. “There are some invalid remarks in the report about Turkey distancing itself from the EU. Turkey stands firmly in its place.”

While Ankara has faced several years of harsh commission reports, none have been so critical across so many areas, including monetary policy, public administration and the fight against corruption, which Brussels said was sorely lacking.

The bloc’s executive said free speech and freedom to protest were being curtailed, local democracy was at risk, and the government had harmed financial markets.

“Serious backsliding continued in the Turkish economy, leading to deeper concerns over the functioning of the country’s market economy,” it said.

Mr Kaymakci also said, however, that Ankara would carefully note constructive criticism. But he expects European allies to support its fight against security threats.

The EU relies on Turkey to house some 3.6 million Syrians fleeing civil war, many of whom would otherwise seek refuge in Europe. The commission applauded Ankara for reducing the number of people trying to cross into Greece on makeshift vessels.

But beyond co-operation on migration and aid for refugees, many EU states say Ankara no longer meets the democratic criteria to be a candidate, let alone an EU member.

The EU is Turkey’s biggest foreign investor and trading partner. And the bloc wants to see a return to the reforms of Mr Erdogan’s first years in power as prime minister from 2003 that made it an important emerging economy.

But the commission said in its report that even with the lifting of a state of emergency in 2018 following the 2016 failed coup, many of its “repressive elements” became law.

As of December last year, 57,000 people were in prison without indictment or pending trial, more than one-fifth of all those incarcerated. Even children were at risk of prosecution if they insulted the president, said the commission.

“There is overcrowding and conditions are deteriorating,” the report noted.

The commission said it is a matter of serious concern that a mayoral vote in Istanbul in March won by the opposition after 25 years of rule by Mr Erdogan’s AK Party and its Islamist predecessors, was annulled and rescheduled for June 23rd.

The commission said that went “against the very core of a democratic electoral process – that is to ensure that the will of the people prevails”. – Reuters