‘We Feared They Would Kill us if we Were Sent Back to China’: Uyghur Mother Who Fled to Thailand

‘We Feared They Would Kill us if we Were Sent Back to China’: Uyghur Mother Who Fled to Thailand 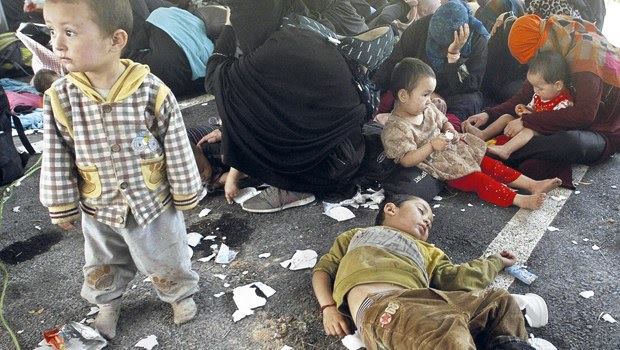 Patima, who asked to withhold her last name for fear of reprisal, has been raising nine children in Kayseri, Turkey, since 2014, when the Turkish government resettled her in the country from Thailand as part of a group of Uyghur women and children. She was five months pregnant when she fled persecution in northwest China’s Xinjiang Uyghur Autonomous Region (XUAR) with her husband Aziz Abdulla and their children to Thailand on Feb. 16 of that year, walking for nearly a month before illegally entering Thailand without passports. The Chinese government had refused to issue them travel documents, citing “political reasons.” Shortly after arriving, her family members and nearly 200 other Uyghurs they met up with inside Thailand were apprehended by local authorities, separated into two groups of men and women with children, and sent to a detention facility.

Patima and her children—the youngest of which was born in detention—had been held in the facility for more than a year, after which authorities began conducting medical exams on the women. Those who were deemed weaker in health or had small children with them were sent to Turkey, a country that has cultural similarities with the Uyghur people and regularly offers them safe harbor. Thailand turned over 173 Uyghurs to Turkey on June 30, 2015, one of whom was Patima, but a week later, Turkish authorities deported 109 Uyghurs to China.

After arriving in Turkey, Patima and her children were given papers and provided with government-subsidized housing and other forms of aid. Her husband is still in detention in Thailand and while she has been able to speak with him regularly by telephone to verify that he has not been forcibly deported to China, his health is not good. Patima also knows little about her remaining family back in the XUAR and fears for their safety. She recently spoke to RFA’s Uyghur Service about her experience escaping the XUAR, which she decided to flee after her husband was blacklisted by the government and because they were under scrutiny for flouting the region’s strict family planning measures.

Two hundred of us were detained. It was all over the news … We were afraid and so we kept saying that we were Turks … We had gotten rid of everything that could identify us as Chinese citizens when we left … We did this because we feared [the authorities] would kill us if we were sent back to China.

They separated the men and women and put us in different places. There were 70 of us, young and old. Seventy of us were together in a room of six or seven square meters (65 or 75 square feet). Women and children only … Five of the [youngest] kids were with me. They took the men to a place three hours away … If we behaved well, they would bring the men to see us once a month. There was a hall where they’d take us. We would meet in the hall so the men could see the children, around an hour at a time. They would bring the men in handcuffs. We would see them, chat with each other, and then they would take them off to lock them up again … The kids would cry and chase after the car that took him away, screaming “don’t take our father.”

[Around six months into our detention], everyone was sick and couldn’t really walk … Now when I think about it—I didn’t think about this at the time—they were probably checking on whether we would be able to stand the treatment we would get back in China. They only took the women for checks. They took 18-year-old women [back to China]. But people like us, who were weak and had small children with them, they sent us to Turkey … There were a lot of healthy young people, people who had put their hopes in Turkey … They were well-studied. The young women who were sent back, they were so smart too.”

We asked what was going to happen to our husbands if they stayed behind. They said they didn’t know. They told us that we could save ourselves and our children, and so we went along with it with that in mind … My children are now studying at Turkish schools, in different grades. They’re showing a lot of promise and they’re being educated well, so we’re happy.

I have not contacted anyone back in the homeland. I don’t want anything bad to happen on account of me. I heard something happened to one of my sisters. Two years ago, I heard she was in prison. I don’t know what the situation is.

[Aziz] calls me secretly. He has to because he’ll get in trouble if they see it. I’ve been able to know that he’s okay because of that … I’ll tell [the kids], “He’s in Thailand, kids. Pray for him. He’ll come someday,’ But they ask me ‘Why doesn’t he come now?’ I tell them he has to stay there but that they’ll bring him here too, Allah willing.” Her voice breaks: “It makes them cry. I also want to cry. […] I won’t show the kids, I don’t let them know what I’m feeling. They don’t know. I have to be brave for them.”