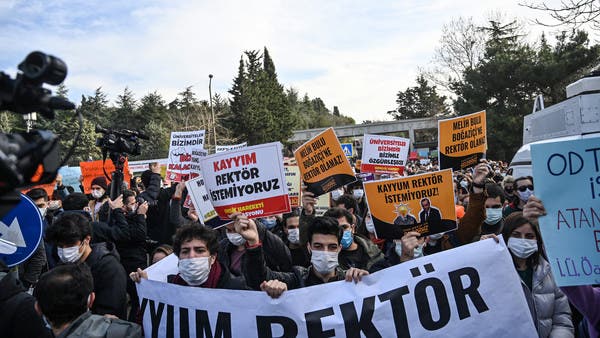 Turkish police on Tuesday detained 17 people after hundreds attended a student-led protest against President Recep Tayyip Erdogan’s appointment of a rector to a top university in Istanbul.

Officers conducted dawn raids in 13 districts in the city, Istanbul police said in a statement, while operations were continuing to catch 11 other suspects.

At least 1,000 people demonstrated outside Bogazici University’s campus on Monday in response to a January 1 presidential decree in which Erdogan appointed Melih Bulu as the public institution’s rector.

Bulu ran as a candidate in the 2015 election for Erdogan’s ruling party.

Critics claim the appointment was another example of political interference in Turkey’s education sector by Erdogan, who assumed the power to appoint rectors after surviving a failed coup in 2016.

Before July 2016, university rectors were appointed through elections.

This is the second time Erdogan has appointed a trustee after his decision in November 2016 also attracted angry reactions and created tensions.

The police accuse the 28 suspects of violating a law on demonstrations and marches, and “resisting an officer on duty”.

An official at the Istanbul police headquarters said those detained were not students but members of “extremely marginal leftist” groups who supported the protests.

The university was known as Robert College when it was established in 1863.

It was handed to Turkey in 1971 and was renamed after the campus location by the Bosphorus river — “Bogazici” in Turkish.

Despite the detentions, there are plans for more protests on Wednesday.

Tags:
Previous Article
It is not us, but Volkswagen, who will lose: Turkish Minister
Next Article
Turkey ranks 97th among 100 countries in COVID-19 transparency

Fears raised over ‘forced disappearance’ of ESP activist in Istanbul