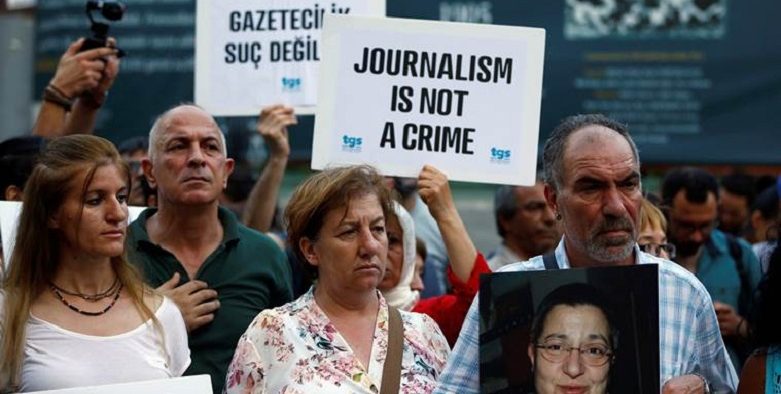 By The Associated Press

ISTANBUL – Journalism organizations in Turkey have criticized a report by a pro-government think-tank that they say catalogues journalists working for international news media in a way that amounts to “blacklisting.”

The Journalists’ Union of Turkey said Sunday it plans to file a criminal complaint against the Foundation for Political, Economic and Social Research, a think-tank with close ties to Turkish President Recep Tayyip Erdogan and his party.

The 202-page report listed dozens of individual journalists and their tweets to argue an alleged bias against the Turkish government in their coverage. The think-tank also put the journalists in “network maps” with their current and past jobs in Turkish media with “leftist and secular” leanings to claim their journalism clashed with press ethics.

Another press advocacy group, the Turkish Journalists’ Association, called the report “a serious blow to Turkish democracy, freedoms of press and expression.”

“It’s a blacklisting document like a police report rather than academic work,” the association said.

“No one has the right to call a report based on open sources a memorandum,” he tweeted Sunday.

Ismail Caglar, one of the three authors, tweeted that critics ignored the report’s study of international media in Turkey and instead focused on the journalists.

“It’s our job as a Turkish think-tank to scrutinize foreign media and its positions,” he said.

Reporters Without Borders ranks Turkey at 157 out of 180 countries in its press freedom index.

The union says 135 members of the news media are currently jailed in Turkey, where businesses with ties to the government own the majority of mainstream media outlets.