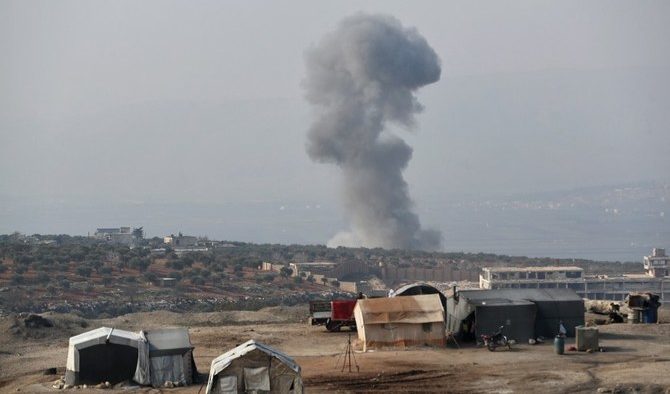 The new year started with intense bombing in the Syrian province of Idlib. The bombing killed two and injured 10 more. Idlib is supposed to be part of the de-escalation zone agreed by Russia and Turkey that was demarcated as part of the ceasefire put in place in March 2020. Despite such attacks taking place, there is speculation that there will be a swap of territory between the Damascus regime and Turkey. Talks about such a swap support the hype about Bashar Assad’s rehabilitation and reintegration into the international community. However, even if there was the political will to do so, Idlib will always be a thorn in the side of such an objective.

A pro-Iran media outlet last week reported that there were several meetings held between Syrian and Turkish security officers late last year. The meetings were allegedly aimed at reviving the Adana Agreement of 1998, which allowed Turkish forces to go up to 5 km into Syrian territory to chase Kurdish militants. The report claimed that a renewed agreement would allow Turkey to extend its reach to 35 km into Syrian territory in return for Ankara handing over the northwest of the country to the regime and ceasing its support for the opposition. As much as pro-Iran outlets would like to propagate this narrative as a prelude for the regional acceptance of Assad — including by Recep Tayyip Erdogan of Turkey — it is hard to believe that the Syrian ruler could be reinstated to the situation he was in prior to 2011.

Why not, some might ask? After all, Russia’s Vladimir Putin and Erdogan, despite being on opposing sides of various conflicts from the Caucasus to North Africa, have been accommodating each other. This is why the term “frenemies” accurately describes the schizophrenic relationship between the two men. We have to remember that the Turkish incursion in Syria happened with tacit Russian acquiescence. And previous confrontations between the regime and Turkey have been halted by Russian interference. The clashes between the Assad regime and Turkish forces in January 2020 stopped after an Erdogan-Putin meeting.

However, all those agreements between Putin and Turkey are momentary ceasefires and do not amount to a solution. The two countries have diverging interest in Syria and have different threat perceptions, hence the mistrust between the two.

Despite being bound by the Sochi agreement of December 2018 and the framework of the Astana talks, it is hard to think of the two agreeing on anything beyond a momentary deconfliction. Though the pro-Iran media outlet claimed the UAE had a role in the alleged Turkish-Syrian meetings, Abu Dhabi’s attempt to normalize with Assad has been resisted by the US, which does not want to see the Syrian president legitimized. It is unlikely that the UAE will expand on its role as a mediator between the Syrian regime and Arab countries. Normalization with Damascus was refused by both Qatar and Saudi Arabia. And Riyadh’s UN envoy clearly said that Assad should be held accountable for his crimes.

At the same time, the US has reined in Turkey’s appetite for a military operation, which the Syrian Democratic Forces was expecting in October 2021. The current US policy favors the status quo, but the perceived American disengagement from the region has pushed the different actors to find arrangements among themselves — hence the speculation that a new agreement, which will accommodate the Kurds, the regime, Russia and Turkey, is imminent.

Even if all their interests align and the different parties reach a point where they want to settle, the situation is far more complex than what the pro-Iran media outlet initially suggested. Idlib cannot just be traded as a chip in a deal between the different parties. Idlib has various opposition factions and it is impossible for Turkey to remove all the “extremist elements,” as suggested in the deal sealed in September 2018 between Moscow and Ankara.

Instead, Ankara has focused on combating the most radical elements, such as Hurras Al-Din, and is seeking to more or less isolate the foreign fighters. The total eradication of extremism is proving difficult in the absence of a final political solution. So, even if it wanted to, Turkey cannot neutralize Idlib for the regime to take over. Any possible attempt to do so by Damascus would result in a bloodbath.

Anyway, Turkey has not shown any signs that it is willing to give up on Idlib. In fact, in the latest Astana process meeting last month, Ankara outlined four impossible conditions that must be met before it withdraws from Syria. One condition was that the different parties reach a consensus on the constitution to protect the rights of the different factions in Syria. Other conditions included the organization of free and fair elections and the formation of a legitimate government. The final condition was the eradication of all terrorist groups that threaten the unity of Syrian territory, alluding to the YPG. These conditions are an indirect way of Turkey saying that it will not withdraw from Syria, as they will be very difficult to meet in the foreseeable future.

Also, what have been perceived as “land swaps” in the past have been mostly the result of military operations. For example, the opposition lost Khan Sheikhun in the south of Idlib province to Russian forces in August 2019, while a Turkish cross-border incursion gained positions in Tal Abyad and Ras Al-Ain in October the same year. If such changes in military positions in the past have been the result of land swaps, why have they involved military escalation?

The truth is that both the Turks and the Russians have limited resources. Hence, they deploy in the areas where they see the most strategic value and where it is most efficient to do so, while vacating areas of lower importance. This means that the scenario of a grand land swap that ends the war and crowns Assad as the winner of the Syrian conflict is very unlikely.

By: Dr. Dania Koleilat Khatib – a specialist in US-Arab relations with a focus on lobbying. She is co-founder of the Research Center for Cooperation and Peace Building, a Lebanese nongovernmental organization focused on Track II. She is also an affiliate scholar with the Issam Fares Institute for Public Policy and International Affairs at the American University of Beirut.