Today, Turkey and Russia stand on opposing sides of the next battle line in Libya’s escalating civil war. But even if they trade blows over the strategic coastal city of Sirte and the nearby airbase at al-Jufra, it remains highly likely that they will ultimately divide the country between themselves, with troubling implications for American interests and regional stability.

Libya’s geography and history are not its destiny, but they shape its current conflict. One of General Erwin Rommel’s lieutenants observed how the country’s sheer scale and wide-open terrain made it simultaneously a tactician’s paradise and a logistician’s hell. World War II in Libya bore that out, with German and British forces rapidly advancing hundreds of miles before grinding to a halt.

These physical features intertwine with Libya’s historical divisions. For millennia before its modern incarnation as a nation-state, Libya’s two coastal population centers were cleaved into politically distinct eastern and western halves, separated by the Gulf of Sirte and expanses of desert. 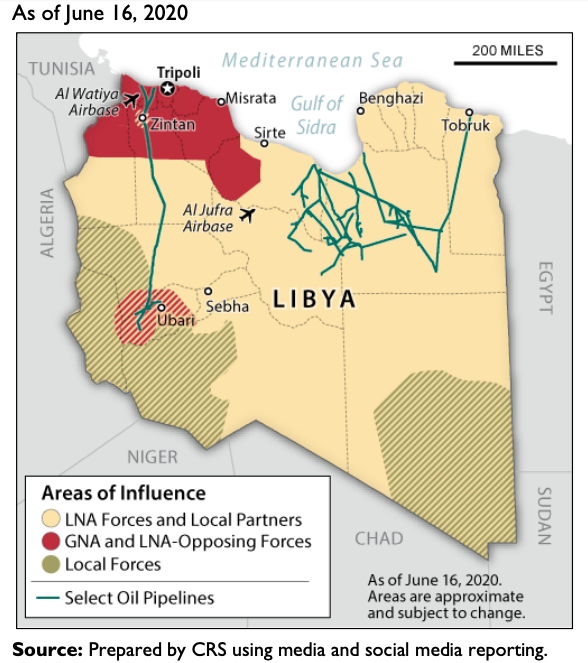 They were first split between the ancient Ptolemies and Carthaginians, then between the Latin western and Greek eastern Roman Empires, before being carved into separate Ottoman and then Italian provinces into the twentieth century. After World War II the Allies seriously contemplated halving the country again, and when Libya became a federalized state in 1951, the capital alternated between Tripoli in the west and Benghazi in the east.

Libya’s civil war today reflects this historical geography. On a map, it mirrors the country’s longstanding divide, pitting the Tripoli-based Government of National Accord (GNA) in the west against the Tobruk-based Libyan National Army (LNA) in the east. Turkey backs the Muslim Brotherhood-affiliated GNA with troops and advanced weaponry; Russia, Egypt, UAE, France and others do likewise for the LNA.

Geography also helps explain the conflict’s stalemated state. Last year, the LNA’s offensive to capture Tripoli and end the civil war by force made big gains before finally halting around the capital’s outskirts. Overextended, these troops then made easy targets once Turkey intervened militarily earlier this year. As in World War II, the battle lines lurched suddenly and drastically as the LNA retreated long distances to the next viable line of defense, around Sirte and al-Jufra in central Libya, along the country’s unofficial historical east-west seam.

Now the conflict awaits its next phase. Turkey announced it must control both points while Russia, Egypt and others declared this a red line and began flooding reinforcements into eastern Libya.

But regardless of what’s next for Sirte and al-Jufra, the country’s existing east-west gulf likely will be reinforced. Squaring off against Russia, Egypt and possibly others, any new Turkish offensive would face much stiffer opposition than its previous operations. Moreover, while capturing these sites would lay Libya’s “oil crescent” at Turkey’s feet and would force the LNA to retreat long distances once again, even then Ankara would face the same problem that bedeviled armies in Libya before it: how to sustain combat power at the end of lengthening, vulnerable supply lines while its enemies’ lines shorten with every retreat. Meanwhile Moscow seems disinclined to try to reverse Turkey’s gains to date, suggesting satiation with its foothold in eastern Libya.

Thus, no matter who holds Sirte and al-Jufra, both Turkey and Russia would be able to maintain strategically vital beachheads in Libya that threaten key U.S. interests.

Turkey already controls sufficient territory for a permanent military presence there, including naval bases to support ships exploring for natural gas in the waters defined by its destabilizing maritime boundary agreement with Tripoli. By securing these advances in the first place, Ankara also notched a victory for its interventionist policy supporting Islamist governments regionwide. 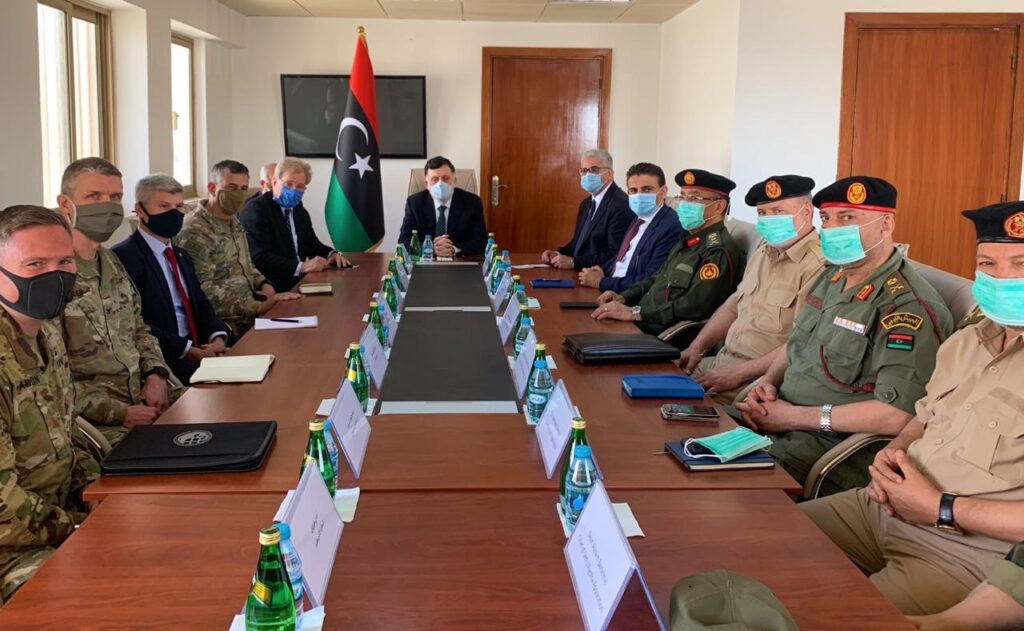 Combined with its air and naval bases in Syria, similar infrastructure in Libya would further Russia’s southeastern encirclement of NATO and potentially pull Egypt away from America’s orbit. With or without Sirte and al-Jufra, there is also a danger Moscow might accede to Ankara’s vast claims off Libya’s coast, thus threatening U.S. interests in developing the region’s energy resources as alternatives to Russia.

And whether or not they clash in Libya, the risk remains that Turkey and Russia eventually agree to determine the country’s future together, like they already do in Syria.

Yet the United States continues its failed “leading from behind” policy. As the Jewish Institute for National Security of America proposed in a recent report, Washington must appoint a Special Envoy for the Eastern Mediterranean to restore American leadership in pursuing a negotiated solution to the Libya conflict, which Europe and others lack the diplomatic leverage or credibility to devise. Building off existing efforts by Greece, Cyprus, Israel and Egypt, he or she also should foster greater cooperation with and among our regional partners to balance Turkey and Russia.

A major battle looms in Libya, but the United States shouldn’t wait to begin addressing the worrying implications for national security.

Jonathan Ruhe is director of foreign policy at the Jewish Institute for National Security of America’s Gemunder Center for Defense and Strategy. Follow him on Twitter @JCB_Ruhe